The Buzzard is essentially the unarmed version of the Buzzard Attack Chopper, lacking the stub wings and the ammo box on the rear bay. The vehicle bears the registration "N230MP" on the sides of the upper section. Like the armed version, it has a small flight instrument panel on the center, which, in the enhanced version, uses the same "Flyer" dial set as the armed variant, the Maverick and the Police Maverick.

The helicopter is intended for use by the Los Santos Police Department, and similar to the Police Maverick, the camera/searchlight can be operated by the NPC pilot (though it is fixed and cannot be angled towards a target).

Like the armed variant, aircraft is only available in a single primary color, which is set to black. 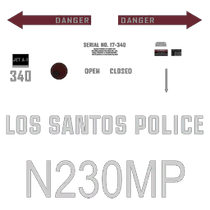 The Buzzard performs identical to its armed variant, being a fast helicopter with nimble handling. However, it is more stable and is able to yaw and pitch much quicker. Its incline and decline speeds remain about the same. As expected, the Buzzard lacks onboard weapons, but any passenger can make use of their weapons, serving as a fast defense helicopter.

Like its armed variant, the Buzzard is powered by a single turboshaft engine located on the rear section, evidenced by the single rear exhaust seen below the tail boom. Said engine powers the 5-bladed rotor, delivering good engine output to ascend quickly. The rotor sound is also shared with the armed variant, appearing to be a higher-pitched variation of the one from the Maverick, with a slightly faster pacing due to the five blades on the main rotor.

The Buzzard on the updated Rockstar Games Social Club.

The Buzzard in the cinematic preview on GTA V Rockstar Games Social Club.

The Buzzard in the cinematic preview on GTA Online Rockstar Games Social Club.

A red Buzzard during an Air Freight Cargo mission, mislabeled as the Havok.

Tony Prince owns a chrome Buzzard as part of the After Hours update for Grand Theft Auto Online. It is used in a Nightclub Management Mission for the player to drop promotional flyers across the city for their Nightclub. Notable for its paint and durability, this variant can still be controlled by the player after the mission ends, though not stored. Its durability will also return to normal state as with many other mission vehicles. 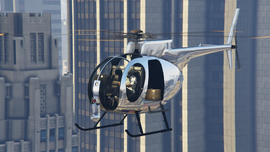