In-game time
“I need the best for this and that's why I came to you. One of my guys has been arrested. They were holding him in Paleto County but he's being moved to Bolingbroke Prison on the next bus. Can you intervene and spring the fool? I'll make it worth your while. Bring him back to the warehouse - he can lie low here until the heat eases off. Just make sure the cops don't follow you.”
— Description

Bust Out is a mission in Grand Theft Auto Online given to the player by Lester Crest. It is available for up to 4 players.

Gustavo, an associate of Lester, has been arrested. The police were holding him in Paleto County, but he's being moved to Bolingbroke Penitentiary along with two other inmates in a prison bus. The bus is heading to the penitentiary on the Senora Freeway via Braddock Pass. Players start at the Yellow Jack Inn and the team needs to stop the bus by killing the driver. The bus is guarded by the San Andreas State Prison Authority driver and one additional prison guard armed with a Pistol (used on board the bus) and a Pump Shotgun (used when on foot). Los Santos County Sheriff will respond immediately to the three star wanted level to protect the bus. Once the guards are killed, Gustavo will enter the player's vehicle or the player can steal the bus and the team then needs to lose their wanted level and take Gustavo to Lester's warehouse in Murrieta Heights. If the bus reaches the prison, the mission will fail.

The start point of the bus, at Paleto Bay Sheriff's Office county jail.

Gustavo on the bus.

An online player approaching the bus. 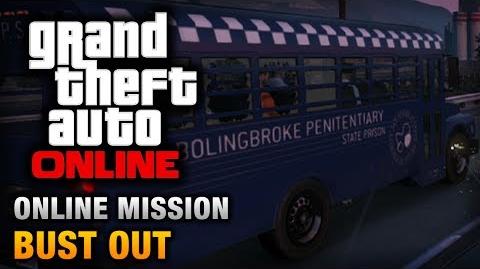