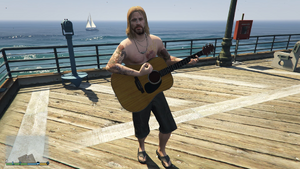 Buskers are street performers that play musical instruments in public places for money. Such pedestrians were only introduced in the HD Universe, featuring in Grand Theft Auto IV, The Lost and Damned, The Ballad of Gay Tony and Grand Theft Auto V.

Wikipedia has an article on:
Busking

Buskers debuted in Grand Theft Auto IV in the form of saxophone players commonly spotted in affluent portions of Liberty City in Broker, Dukes and Algonquin, mostly in various parks, subway stations and waterfronts, as well as stages of the Superstar Café.

Evidently having only a saxophone as a musical instrument, the busker will only play songs that can be heard on the Jazz Nation Radio 108.5 radio station. In most of his appearances, the busker is depicted with a buttoned up brown trench coat, and his music can easily be heard within hearing distance, a good hint that he is nearby. Most buskers also occasionally wear a hat showing he may be poorer than others by how worn out it is.

In GTA IV, when standing close to a busker, the player has the option of giving him $10, restoring the player's health and receiving an expression of gratitude from the busker, in the form of a simple "thank you". However, should the player push the busker, he may stop playing, drop his musical instrument and respond unfavorably to the player. Running past a busker in close proximity will also force him to drop his saxophone and walk away. Unlike many minor items dropped by pedestrians, the player cannot pick up a busker's dropped saxophone.

After giving the busker $10 three times, the player will eventually receive the instrumental ringtone "St. Thomas " for their cell phone. This is one of the songs the busker plays and is also featured on the Jazz Nation Radio 108.5 station.

Retrieved from "https://gta.fandom.com/wiki/Buskers?oldid=1112181"
Community content is available under CC-BY-SA unless otherwise noted.