The Business Update is a content update for Grand Theft Auto Online and Grand Theft Auto V. It was released on March 4, 2014 as part of the 1.11 patch and features multiple business-themed items.

This update added multiple high-end vehicles, including the new Turismo R. Many formal clothing items have been added as well. Two new weapons, the Heavy Pistol and the Special Carbine, are also available for GTA V and GTA Online.

In GTA V, weapons are deposited into all three characters' inventory with two full ammo clips and all three cars are accessible from their garage properties. In GTA Online, players are able to purchase the new weapons and their attachments at any Ammu-Nation location while the vehicles are available for purchase from Legendary Motorsport and Elitas.

Two new weapons are included in the update.

Four new vehicles are included in the update. Two car names returning from Grand Theft Auto: San Andreas, the Albany Alpha and the Dinka Jester. A new super car, the Grotti Turismo R came as the successor of the Turismo, and a new airplane, the Buckingham Vestra.

Furthermore, the update will also grant Michael and Franklin the hangars at Los Santos Airport for free, as they will have the Vestra ready for them. Obviously, this also will give them clearance to roam in the airport's tarmac without earning a wanted level. This does not apply to Trevor, however.

Some bugs have been fixed. The bug that allowed players to duplicate their car and sell it, while still keeping the car, has been patched. Customized cars now sell for full price, instead of it having a cap of $10,000. Various other minor glitches have been patched. 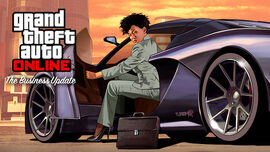 Artwork for the update. 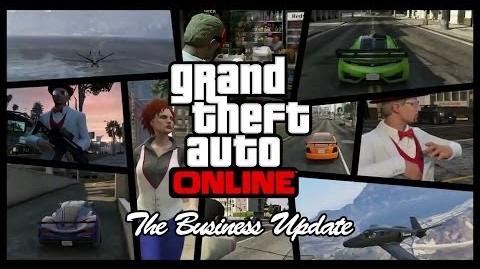