The Burrito is reintroduced in Grand Theft Auto IV in a redesigned form, bearing a Declasse brand. It is designed in the likeness of the 1996-2002 Chevrolet Express with a wider, more awkward appearance with wheels disproportionately smaller than it body, and positioned at more spread out positions of its chassis unlike most modern vans. The van resembles its base for the most part, but the rear and sides have been taken from the third-generation Chevrolet Van (the creases on the sides have been interpreted as seams) and taillights bear resemblance to those found on the Dodge Ram Van, giving the overall vehicle an anachronistic appearance. The standard Burrito no longer features the sporty accessories; in GTA IV, these are seen only on the Gang Burrito. Companies which use the Burrito include T.Watts & Sons, Spin on This Laundromat, LibEl and Pharte Gas.

The Burrito always comes with a permanent roof rack, but can also sport either stacked piping or horizontally laid scaffold piping tied to the rack. The Burrito only spawns in a single color, although, if the player manages to change it through a trainer, the secondary color will be applied to the side panels and the rear doors.

The Burrito in Grand Theft Auto: Chinatown Wars appears to be based to an extent on the same Burrito in GTA IV, with a utilitarian appearance and a similarly poor performance. However, the van lacks a roof rack, and its color scheme appear more diverse, with some featuring company liveries encompassing the entire body of the vehicle, including FlyUS, Sprunk, Eris, Burger Shot, and Ranch.

In Grand Theft Auto V and Grand Theft Auto Online, the Burrito returns with the same model as the one in GTA IV and it is featured with new liveries and thanks to revised graphics, chrome finishes have been highlighted.

Exclusive to Grand Theft Auto V and Grand Theft Auto Online, a second generation is available, with newer details but retains the overall bodywork. Much like the real-life Chevrolet Express, the second generation Burrito retains the previous generation's profile. The sides retain the first generation's 1996 Chevrolet Van - inspired creases, while black plastic cladding has been applied to the front and rear to make the van appear more in line with GM's current offerings, more specifically, the GMC Savana, itself a badge-engineered version of the Express.

This version is distinguished by the rearranged light setup: the front end features four square lamps on the upper side and rectangle turning signals below, and the grille no longer features a partition on the middle. The rear lights are much larger and placed next to the rear door windows. Its badges are located directly on the doors.

In contrast with the analog dials of the first generation, the second generation Burrito uses a digital set of dials.

The Burrito is widely considered to be the best van in the 3D Universe. Its powerful engine grants it moderately good speed and acceleration, its sporty suspension leads to stable handling, steering and braking, and its bulky body gives it good endurance. It can carry four people, making it useful when bringing allies to a fight, although its large frame can make it an easy target for gunfire. It is also fun to drive, with independent rear suspension that makes drifting and powersliding easy (although it is easy to spin out and crash) and often causes the rear inside wheel to lift off the ground for some stylish showboating. All versions are RWD.

The van has lower ground clearance in San Andreas and Vice City Stories than in Vice City.

The GTA IV Burrito has degraded performance; it is not as fast as previous renditions, and, although its extra mass allows it to withstand more damage, this gives it poor acceleration. Nonetheless, the Burrito is the fastest vehicle in the "Van" class.

The Burrito is powered by a single cam Inline-4 engine, coupled to a 5-speed gearbox in a front engine, rear wheel drive layout. Its engine sound is similar to other vans featured in the game, as well as the Steed.

The first-gen Burrito in Grand Theft Auto V retains many of its qualities from GTA IV, with slight improvements to handling and speed. As an effect of GTA V's new driving physics system, steering has more than compensated for the vehicle's girth, and a marginally improved top speed has allowed the two generations of Burrito to remain the fastest vans in the game. The second-gen Burrito performs the same as its predecessor, but has slightly slower acceleration.

Durability of both generations remains excellent, as they can endure light collisions with ease. 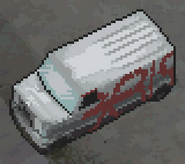 The Burrito in the Nintendo DS version of Grand Theft Auto: Chinatown Wars.

The McGill-Olsen Construction Burrito in the cinematic preview on the updated Rockstar Games Social Club.

The Burrito (2nd gen) in the cinematic preview on Rockstar Games Social Club.

Spin on This Laundromat. 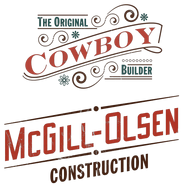 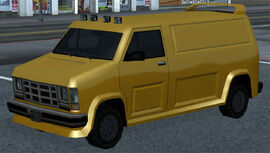 The Burrito in GTA Chinatown Wars may also appear in the form of gang-owned drug vans, known simply as "Burritos," which appear on the streets of respectable gang territories (except the Triads) upon completion of "Carpe Dime." Four types of the vans may also appear during "Excess Delivery" submissions.

These Burritos are closely associated with the Drug Dealing side quest in the game, being used as transport to smuggle drugs hidden in cubby-holes on the door; after "Carpe Dime," players may steal one from the streets, drive to a secluded safe house, and check for drugs, before they are finally allowed to store the van in a garage. The vans are actually similar in performance to a conventional Burrito, but they can do burnouts and appear with unique gang colors and accessories, similar to those seen on their other gang cars; the Midtown Gang's Burrito is the only Burrito which is smaller than other forms of Burritos. There is also a pink-and-white Triad variant of the Burrito, but the van is unavailable normally, and must be spawned using a garage editor. The Triads Burrito features unique lower cladding, under-body lighting, and a high roof.

There is a bullet proof, explosion-proof, fireproof, and damage-proof Spanish Lords Burrito located at the Spanish Lords' warehouse which Huang raids during the mission Kenny Strikes Back. Note that this Burrito only spawns when the player finishes Kenny Strikes Back. In order to get it, the player must park a bike very next to the gate and jump diagonally so the player can jump into the warehouse without playing the side-mission. Inside the warehouse, the Spanish Lords will not shoot the player even when attacked. Unlike when the mission is normally played, the van is started by a screwdriver instead of disabling an immobilizer. However, if the player does the mission while the Burrito is being used, the Burrito lose all its armor. If put it in the garage, it will lose the damage-proof, fireproof, and explosion-proof effects, only the bulletproof effect is retained. The only way to destroy it is to drive into the water or turn it upside-down, or store it in a garage (to make it lose some armor) and destroy it by damaging, burning, or exploding it.

"Mob" variant, complete with a "sunroof."

"Midtown Gang" variant, being smaller than a usual Burrito.

In the PSP version of GTA Chinatown Wars, players may acquire a unique brown and yellow Burrito from Melanie Mallard, after her last mission appearance. 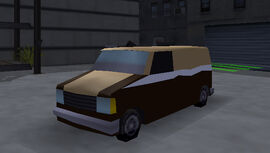 In GTA V, A Burrito with an unobtainable Remote Sniper appears in the mission Caida Libre. This vehicle can not be kept and has to be destroyed in the mission

Exclusively seen in the mission Bury the Hatchet, this variant is used by the Los Santos Triads to transport their men into the graveyard of the Ludendorff church. Just like any vehicle in North Yankton, it features snow chains on its tires and snow on its upper surfaces (including the windshield). This variant can be obtained, but cannot be removed from the intimidate vicinity, as the mission requires the player to return to the Asea in order to progress through the mission. 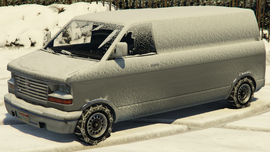 A unique variant of the McGill-Olsen Construction Burrito appears in the game as a separate model.. 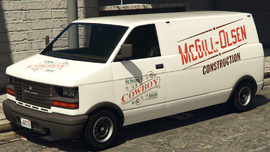 As the vehicle cannot be modified, this variant cannot be created. It features a Classic Pure White primary and pearl color[3], and can spawn with any of the available extras (coffee cup holders, cigarette holder, etc). 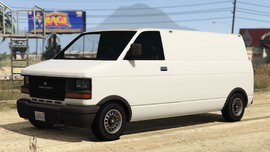 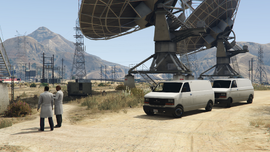 Two scientist Burritoes spawning at the satellite array.
Add a photo to this gallery

Similar to the Speedo and Pony, the vans are usually parked in fixed locations around the state or parked at the side of the road, particularly in the industrial areas of Los Santos.

It should be noted that the Burrito appears parked in fixed locations around the map and is also scripted to spawn during certain missions. Regardless of its appearance, the van will often appear in the same colour and/or with the same livery each time the player finds it; for the first generation Burrito, the van will almost always spawn in Metallic Ultra Blue and with a Los Santos Water and Power livery, and for the second generation Burrito, the van will almost always be Metallic Dark Silver.

The second generation version has a tendency to spawn near all fruit stands across Blaine County and Los Santos County.

The first generation Burrito is part of vehiclemodelset "CARS_CONSTRUCTION" which commonly appears driving in and out of construction sites or parked around them.

The second generation Burrito is part of vehiclemodelset "TRUCKS_DELIVERY" which commonly appears driving in and out of alleyways and parking areas.

Just like GTA V, the vehicle doesn't regularly spawn in traffic and is only regularly found parked at the side of the road.

Retrieved from "https://gta.fandom.com/wiki/Burrito?oldid=1241750"
Community content is available under CC-BY-SA unless otherwise noted.