GTA Wiki
Register
Don't have an account?
Sign In
Advertisement
in: Side Missions, Missions in GTA San Andreas
English

Burglar is an optional side-mission available in Grand Theft Auto: San Andreas. The mission is available at the start of the game, although it is first introduced to the player during Ryder's mission, Home Invasion.

The mission can be activated whenever the player enters a black Boxville between the hours of 20:00 and 6:00. The mission requires the player to quietly search houses for anything worth stealing, such as Television sets, stereos, radios, video game consoles (such as the CJD 500), VCRs, and microwaves. In addition, on the floor in living rooms and bedrooms the player may also find money ($20-$70), knives, baseball bats, pistols, silenced pistols and shotguns (but only the first time he enters a home; once he leaves and re-enters the property, additional items will no longer appear).

Not all the houses in a certain area can be stolen from, and sometimes some houses can either be accessible or not. Only those with a yellow arrow in front of the door can be entered and looted.

Accessible homes in Los Santos could be found in:

Accessible homes in San Fierro can be found in:

Accessible homes in Las Venturas are found in:

Once inside a house, the player must find an item and take it back to the van. The player must also be quiet, as making too much noise will wake the house's occupants, and they will call the police; giving the player ten seconds to escape the house before they do so. Failure to get out of the house in time results in a three-star wanted level, and the player must clear it before offloading their merchandise or breaking into another house. On some occasions, the inhabitants will already be awake upon entering the home, and sometimes it can be a whole house full of gang members (if the house is within a gang territory). When it is near dawn, specifically after 06:00, if the player still has items in the truck, the player must unload all of the items stolen at a nearby garage marked on the map. 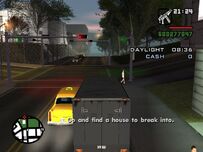 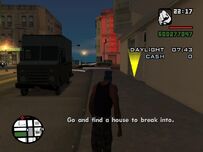 The player creeping towards a house. 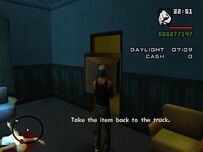 Stealing a television after killing the only inhabitant of the house. 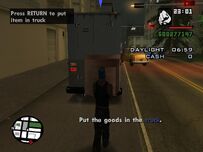 The player about to store the television inside of the van. 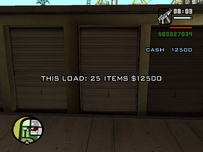 The effect of "not stolen" bug

The black Boxville can be found parked in each of the three cities: 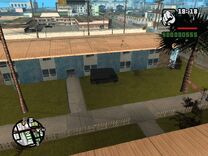 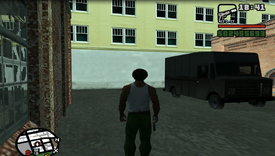 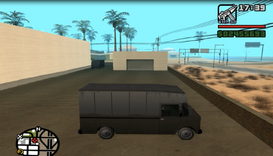 Bringing the goods to the lock-up before 06:00 is unnecessary. If CJ is inside the truck by 06:00, he will receive five in-game hours to head to the lockup. There is one lock-up in each city. 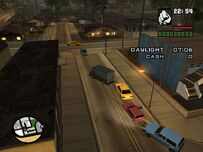 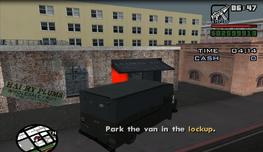 The lockup in Doherty, San Fierro. 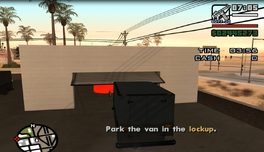 The lockup in Pilgrim, Las Venturas.

The money earned from burglary depends on the number of goods unloaded at once. It's calculated with the following formula:

The BradyGames Official Strategy Guide claim that earning over $10,000 or more from the Burglar mission is required for 100% completion, however, that is not necessary: Getting a total of at least $10,000 from the mission, however, will give the player infinite sprint, as well as an additional $3,000. Unloading at least 23 items at once will instantly complete the mission.

Upon entering a house, the noise meter appears. It is similar to other meters in the game that gradually fill while performing a certain action. There are ways Carl can walk throughout the house that will not make the meter fill up completely. He can crouch and then slowly walk. Crouching reduces noise while being able to move quickly. Alternatively, he can walk very slowly, or wield a heavy weapon that prevents running. Bumping into the interior or opening a door inside the house also fills up the noise meter. If the noise meter is completely filled, the player has ten seconds to get out of the house before the cops arrive.

One of the easiest methods is obtaining a Silenced 9mm and shooting the occupants of the house in the head, thus eliminating the noise meter. Shooting sleeping occupants can be difficult, as they automatically rise and give barely seconds to aim straight at the head and kill the occupant before the police are notified. However, if CJ kills the occupant and leaves just before the police arrive when he returns inside, (assuming there is only one occupant) the noise meter will be gone. It is also possible to kill the occupants with the help of a flamethrower, but CJ must aim at them and fire while being cautious as it may be harmful to him as well (only if fire immunity has not yet been gained from the Firefighter missions).

Another method is to sneak to an item, pick it up, walk to the living room, and just run to the door. Although this will alert the occupants and the ten-second countdown will appear, it should be enough time to leave the house. Once done, put the item in the Boxville and return into the house. The occupant(s) will be asleep again, giving the ability to repeat those actions and take everything in the house.

Non-sleeping occupants do not respawn when killed by the player, so another method would be to run into a home, shoot all the occupants with a preferred weapon, run out before the police are alerted, and then return to the home. If all occupants were killed, then the noise meter will disappear.

Before 20:00 head to a place filled with residential houses that can be robbed. At 20:00, start the mission and quickly look for a house to rob. Choosing a house before the mission starts is impossible due to houses being randomly selected targets. This way, one can possibly have more time in robbing, but still has to watch out for the countdown timer. The Boxville can also be parked with the back facing the house's entrance, saving some time used to run all the way to the back of the vehicle, wherever it was parked.

It appears that the closer to 20:00 the player enters the house, the greater the chance will be to encounter the occupants while they are awake. A dangerous situation can also present itself in Los Santos, in which a room full of enemy gang members, even allied gang members, can be encountered. Gang members with weapons will shoot at the player and police will still be notified.

Pedestrians who have guns (A topless black male DJ in a red hat and pants, a black car-jacket wearing blue, and an older rich Hispanic man wearing purple) will attempt to retaliate against the player, with the Hispanic man being the most dangerous as he is armed with a shotgun. Aiming at sleeping pedestrians with a gun will wake them up. By shooting them in the head quickly enough, they will not make calls nor alert other residents in the house. If they are shot somewhere besides the head and a second shot is required to kill, the police will be alerted. Homes in Los Santos have the poorest value. Residential homes in San Fierro are moderate, but very far from the lockup, as buildings near the lockup are more commercial. Las Venturas has the most to offer, especially Prickle Pine.

The best place to go in Prickle Pine is the streets along Millie Perkins's home, as many of them are more likely to be accessible. They are all adjacent to each other, so distance is not a problem. The interiors of all homes have two stories of fancy rooms with expensive objects and sometimes money and pistols lying around. There are at least two residents inside in each house, usually sleeping, but on some occasions, there is one sitting in the living room. To maximize the time, Carl must be in Prickle Pine with the Boxville already parked in front of the first house before the time starts. It usually takes two hours in-game time to drive to Prickle Pine, so by 15:00 or 16:00, Carl needs to be in the Boxville. To quickly get to Prickle Pine, head north using the Pilgrim entrance to the freeway. Go off-road after passing the vehicle overpass to Spinybed, and continue until reaching Prickle Pine. Because there is no fence, entering Prickle Pine is easy, as there is an empty lot next to the Prickle Pine vehicle overpass. Wait for the 20:00 time at the side of the road. When the game starts, look for the nearest house. Once the player starts, he has to take note of the timer. By the few seconds until 6:00, CJ has to be in the truck for the next part to start. The player has five in-game hours to drive back to the lockup. They can simply retrace the steps in the freeway, and then make their way out. If the player can maximize their time as well as be lucky enough to steal very expensive objects, they can reach the $10,000 requirement in just one burglary. Another great place to go is Ocean Flats in San Fierro. Although it is a slight bit further from the location of the lockup, there are more accessible houses here and features spacious interiors, giving the player more items to rob.

Playa del Seville and the nearby Willowfield is also recommended, as these locations are closer to the lockup and feature cul-de-sacs that feature smaller, easy-to-rob houses.

A brown television without buttons or knobs.

A red and black radio. 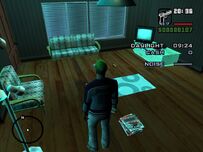 Money can be found in living rooms and bedrooms. 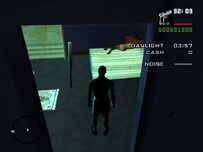 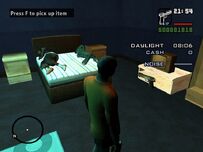