No
“Get 'em while they're hot. The classic Stallion muscle car's been imported from Liberty City to Los Santos. You might find some baggies or baggy rubbers tucked into the back seat, but that's part of this lady's charm. She's a dime. Featuring exclusive Burger Shot Livery.”
— Southern San Andreas Super Autos description.

The vehicle is exclusive in Grand Theft Auto V for players returning from Xbox 360/PS3. It appears during the Stock Car Races and will become available in each protagonist's garage once the player wins the 1st stock car race.

The Burger Shot Stallion is essentially a Stallion with a Burger Shot racing livery. In terms of design, the vehicle retains the body and chassis from the regular version, but incorporates a front diffuser below the car and a rear wing on the trunk. Minor adjustments to the bodyline after the B pillar were made, where the chrome lining separating what would be the retractable roof has been removed to make way for the livery, while the interior features a roll cage.

The vehicle is only seen in a yellow color all over the body, which is actually part of the livery texture (in the files, it is set to spawn in a Worn White color, with a Worn White pearlescent color). It uses a different set of wheels, being similar to the "Drag SPL" muscle rims available in Los Santos Customs. Said rims can also support a dedicated color, being set to Metallic Formula Red in both naturally-generated and purchased examples (although it will reset to the default alloy color if the wheels are changed).

The Burger Shot Stallion has the following minor sponsors: 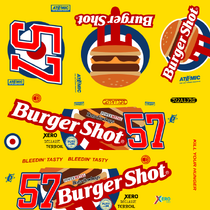 As with all race versions of vehicles in GTA V, the Burger Shot Stallion does hold improvements over the standard variant, including a slightly higher top speed, and a much faster acceleration, yet unlike the other Stock Cars, there is no improvement to stopping power, and handling remains unchanged. Unlike the other three stock cars, its mass remains the same as its base model, while the other stock cars only suffers a slightly decreased weight compared to their base models.

Like the regular Stallion, the vehicle has a 5.7 liter (347ci) twin-cam V8 engine, a 5-speed gearbox and an FR layout. It uses the same low-revving sound from the Stallion, the Buccaneer and the Blade. 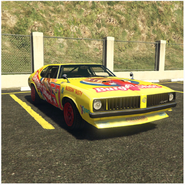