Logo in the HD Universe.

It is a parody of American fast food chains Hardee's and Burger King. The name and color scheme resembles Burger King, but the style of logo resembles Hardee's. Its notoriously unhealthy and sub-par food, aggressive marketing tactics (especially towards children in particular), and boastful identity (even prizing its status as America's favorite chain restaurant) suggests that it also parodies McDonald's (though McDonald's is parodied in the HD Universe as Wigwam Burger).

Burger Shot first appeared in the form of "The Burger Shot," a small restaurant in GTA Vice City (among many other less known outlets in the Game) where the player can replenish their health if it is below 100 points. The restaurant has risen in prominence in GTA San Andreas, where it is now a large chain based in multiple locations. In addition to replenishing health, Burger Shot in GTA San Andreas allows the player to eat from a range of set meals in order to eliminate their hunger, or accumulate fat by eating fatty food. Burger Shot is absent as a restaurant chain in GTA Liberty City Stories and GTA Vice City Stories (with the location of its western food court and neighboring The Cheesy Crust Pizza Co. being occupied by Flap Lickin' Chickin, while the eastern food court locations were undeveloped spaces). However, it is mentioned in radio commercials in GTA Liberty City Stories, as well as GTA Vice City Stories, which mention that the restaurant sold V-Rock window stickers as part of the station's Vulture Prize Patrol promotion.

Burger Shot re-appears in GTA IV as a location where the player can replenish their health. Players can purchase a $1 "Bleeder" burger at any Burger Shot restaurant for full health. The player can also download a Burger Shot background for their upgraded phone via Vipluxuryringtones.com. Burger Shot operates its own website, Burgershot.net; certain Benson trucks also carry the Burger Shot logo. In Episodes from Liberty City, the Burger Shot and Weazel merchandise a menu with Republican Space Rangers action figures. The chain is one of the sponsors of the CNT show, I'm Rich.

Burger Shot outlets are inaccessible in GTA Chinatown Wars, but players can obtain food prizes from Burger Shot in the form of fries or burgers for health by purchasing its scratch cards.

Originally, The Burger Shot in GTA Vice City lacks any readable menus, although it still does display images of a variety of burgers, sandwiches, and side dishes. Burger Shot in GTA San Andreas, however, offer the player four meals, each with different quantities of fats, with one meal, the Salad Meal, lacking any fats. The names "beef tower" and "meat stack" are both obvious sexual euphemisms for penis. In Las Venturas outlets, the pricing of the Beef Tower, Meat Stack, and Salad Meal are 20% higher than in the rest of the state, as noted below:

In GTA IV, the player can only purchase a $1 "Bleeder" burger, and outings with friend or girlfriends to Burger Shots will nominally cost even higher at $100. It is interesting to note Burger Shot tills, as well as burgershot.net, also promote four meals on menus in a similar fashion as what is offered in GTA San Andreas, although only the "Bleeder" burger is available and consists of only a single burger costing $1:

In GTA Vice City, The Burger Shot outlets in Vice City are located in the North Point Mall in Vice Point alongside another three outlets (the Beef Bandit, Cheesy Crust Pizza and Shaft Hot Dogs) on both the east and west sides of the mall.

On the east side.

On the west side.

In GTA San Andreas, Burger Shot is located in each of San Andreas' three major cities, Los Santos, San Fierro and Las Venturas, and as a result is not found in rural San Andreas.

The same female server appears in all the locations. In contrast to her counterparts at Well Stacked Pizza Co., and Cluckin' Bell, her attitude towards the customer is overly ingratiating.

In Grand Theft Auto IV, Burger Shot operates a total of ten outlets in and throughout Liberty City and Alderney State alone, including two integrated mini-restaurants at the city's two Memory Lanes bowling alleys, and one closed outlet in Cerveza Heights, Dukes. Some of the outlets features padding on the windows and signs on the entrance stating that the store has either undergone renovation, closed down, or moved. They include as follows: 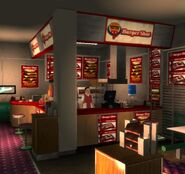 Burger Shot reappears in Grand Theft Auto V and Grand Theft Auto Online, with the same logo as in GTA IV. However, the stores are no longer accessible. There are two Burger Shot restaurants in Los Santos, located in Vespucci Canals and the Pleasure Pier. Its main stock competitor is Up-n-Atom Burger.

Pleasure Pier, Del Perro. Based on the Pizza Hut location on the Santa Monica Pier in Santa Monica, California[1].(Night view)

In Grand Theft Auto: Chinatown Wars, scratch cards promoted by Burger Shot can be purchased at various stores, and the player can win cash or free food.

In GTA San Andreas, the Marina branch of Burger Shot in Los Santos is a significant location for several missions, where it temporarily becomes OG Loc's place of employment, working as a "hygiene technician" (a cleaner) as part of his parole work placement. It is from this outlet that OG Loc asks for Carl Johnson's help to kick-start his rap career. In addition, the Redsands East Burger Shot in Las Venturas features a parked Faggio that is used to perform a courier side-quest with the Burger Shot outlet as the nerve center where the player refills his stock of "merchandise." Upon completion of the side-quest, the outlet becomes an asset that pays the player $2,000 a day.

In GTA IV, Burger Shot makes a slight cameo in First Date in the beginning cutscene as one of the possible locations for Niko to take his date or friend to. In the cutscene, Little Jacob is seen eating a "Bleeder" (a Burger Shot delicacy) right outside of it.

In GTA Chinatown Wars, the Beechwood City Burger Shot is where the player meets with Lester Leroc for his strand of missions.

In GTA V, Michael drives Jimmy to a Burger Shot to receive a drugged soda from Ahron Ward during the mission Did Somebody Say Yoga?.

A non-interactive menu board for Burger Shot in GTA San Andreas. 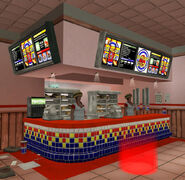 The till area of a Burger Shot store, GTA San Andreas. 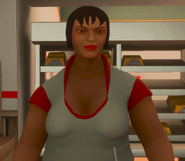 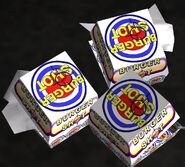 A menu for beverages, and sandwiches. 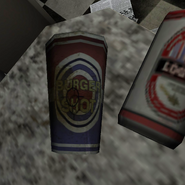 The shared interior of most Burger Shots in GTA IV. 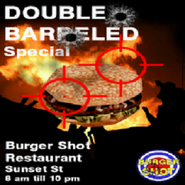 An ad for the Double-Barreled special, as seen on bus shelters. A deteriorated version also appears inside Bucky Sligo's house in Grand Theft Auto IV.

A menu for some of the newest tastes.

An advertisement for the Heart Stopper burger.

An advertisement for the Bleeder burger.

The Pleasure Pier location in the original version of Grand Theft Auto V.

Cup and paper bag in the kitchen of Michael's mansion in Grand Theft Auto V. 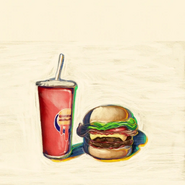 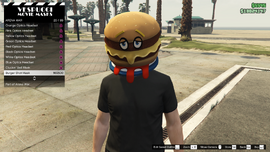 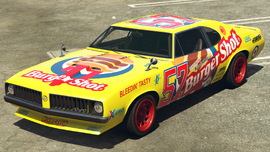 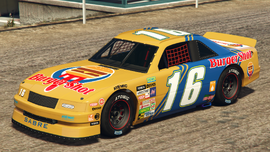 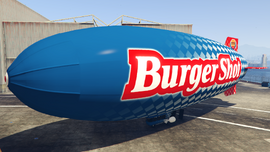 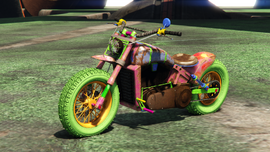 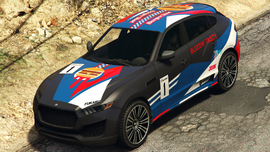