The Bureau of Narcotics is a law enforcement agency in Grand Theft Auto IV based on the DEA. Like the DEA, their main purpose is to combat drug smuggling and use. They feature no prominent role in GTA IV, and are only mentioned in a news report on The Liberty Tree's website about a joint raid on a mobile meth lab (which takes the shape of a Boxville) with the LCPD and NOOSE. It is then revealed in another report that the Bureau seized the meth lab to educate people about the dangers of methamphetamine. 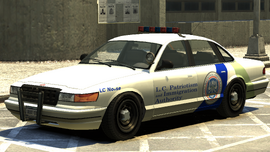 NOOSE Cruiser
Add a photo to this gallery

Combat Shotgun
Add a photo to this gallery

Retrieved from "https://gta.fandom.com/wiki/Bureau_of_Narcotics?oldid=1251929"
Community content is available under CC-BY-SA unless otherwise noted.