View source
watch 02:46
The Quarry - The Loop
Do you like this video?
Play Sound
This page is about the property required to run a Gunrunning business. For operations of the business itself, see Disruption Logistics.

Bunkers (also known as Los Santos Airbase Bunkers, according to the sign) are purchasable properties in Grand Theft Auto Online added in the Gunrunning update. Judging by the signs seen on the entrances, it is implied to be former military facilities.

Bunkers are huge underground facilities introduced with Covert Ops. They may be customized with several additions, similar to Motorcycle Clubhouses and CEO Offices. There are 11 bunkers available to purchase from Maze Bank Foreclosures after receiving an introductory phone call from Agent 14.

Go to foreclosures.maze-bank.com to purchase a Bunker and start your Gunrunning Business as a VIP, CEO or MC President.
“Don't ask how I got this number. We met a while ago, I think. Or we should have done.
There's a new property on Maze Bank Foreclosures I'm pretty sure you're gonna find interesting.
Eighty Seven percent sure according to our current algorithms.
It's an underground bunker, manufacturing facility, and money making opportunity.
Take a look on the site.

”
— Agent 14's phone call
“Let's not pussyfoot around, I know who you are, I know what you're into.
We've put up a property on Maze Bank Foreclosures, and you're just the kind of tenant we want taking it.
You'll be starting an underground operation in more ways than one.
Log on, click buy, and we're in business.
”
— Alternate call
“Quite a digital footprint you're making, you don't mind my saying so. Little foolish.
Anyway, there's one thing an operator like you needs right now, and that's doomsday protection.
Really, theres[sic] a lot more to the underground bunker we just put up on Maze Bank Foreclosures, Including[sic] business opportunities, but that's part of it.
Log on, take a look, and buy it. You won't regret it.”
— Alternate call

Go to your new Bunker

to gain access to the Gunrunning Business. Here you can manufacture weapons to sell on for profit or complete research to unlock exclusive weapon and vehicle modifications for purchase.
“So you're the buyer? I didn't think we were going to shift this thing.
Come down and I'll take you through the handover procedure.”
— Agent 14's call

During the introduction after entering the player's new bunker, Agent 14 meets them at the inner entrance, hands over a large ring of old-fashioned warded lock keys and implies that the gunrunning operation was being run by his government agency but officially they were certainly not doing "anything inappropriate," and now the location was being shut down while they move elsewhere and sold as a completely vacant bunker. He suggests the space could be turned into something like a boutique hotel or a microbrewery. However, he gets a phone call checking up on the moving out progress and quickly prevents the protagonist from wandering off to look around on their own. He becomes exasperated when the other end tells him to "do it, but don't do it," and after hanging up, switches gears and instead presents the bunker's current use, making arms, as a going concern. Agent 14 then proceeds to give the player a full tour of the bunker, pointing out that there's space to store a Mobile Operations Center if they so wish, a gun range, and then fully disclosing that instead of using the space for something civilian, the player could make some real money in weapons manufacturing on behalf of the government and how the process works, assuring that he himself has received medals for the work. After the tour, he notes he really needs to get going as they're "bombing someone tomorrow," though he half-heartedly tries to retract that and proceeds to leave the bunker, reminding the player that officially they've never met but he will keep in touch and offer further guidance.

The entry lobby is the main area where the player enters. Four Caddy carts are provided for the owner and their allies for easy navigation in the bunker if the transportation option was added in the purchase. At the right-hand side of the entrance, there is a marked area where the supplies are placed, which may have a variable amount of props depending on the supply's level. There is also an area marked "BAY 01", where the owner's personal vehicle is parked when driven into the bunker. This is not a permanent garage space, but rather a safe parking space to use while in the bunker. Switching sessions while staying in the bunker will move the vehicle outside to the nearest road.

The Bunker Vehicle Workshop is located next to the entry lobby and becomes operational upon purchase of a Mobile Operations Center and the Anti-Aircraft Trailer. The player can go to the mechanic in order to customize every vehicle of this area (considering that the MOC cab also counts).

The research and manufacturing area is connected to the entry lobby (just taking a U-turn from the entrance), where several machines can be seen, as well as a small table where the scientists are seen with blueprints of an Assault Rifle Mk II. Two Vending Machines are seen here as well. If the equipment upgrade is purchased, ventilation systems are seen on the roof.

Within the area, there is an office section with a laptop that provides access to Disruption Logistics, which is used to run the gunrunning business operations. On a corner of the management area, the player can find the gun locker and their personal room (if purchased).

Next to the research/manufacturing area, there is the storage area, where the gunrunning supplies are stored. Depending on the bunker's supply level, various crates containing weapons and ammunitions are seen here. If the security upgrade is purchased, the entrances will have steel grating on the doors. Chemical bathrooms are seen in the small portion connecting the entry lobby, the research/manufacturing area, and the storage area.

Further ahead from the research/manufacturing area, a shooting range is available for those who purchased it and will have a small alcove containing the shooting range rewards.

A set of hallways are seen on a side of the bunker, with the main one providing a direct connection between the entrance lobby, the research/manufacturing area, and the shooting range, with a secondary hallway connecting the primary hallway to the Bunker Vehicle Workshop. A couple of hallways lead to cul-de-sacs, suggesting plans to extend corridors further.

Only one bunker can be owned at a time: purchasing another will trade-in the old one for the new one. 50% of the purchase price of the first bunker will be refunded to the player (assuming it was not purchased for free), as will 50% of the cost of any expansions and upgrades purchased for that bunker; all expansions and upgrades desired will have to be repurchased for the new bunker. All supplies, stock, and research-in-progress will be lost and should be taken care of first. However, all completed research is permanently kept for that character, and if a MOC is owned, it will be automatically moved to the new bunker as well.

While registered as either a CEO, VIP, or MC president, owning a bunker will incur a standard daily fee of $2,000. A fully upgraded bunker, done through Disruption Logistics, will cost $4,500 daily.

A bunker's business functions will work as long as the owner is in a session, and is not dependent on being registered, allowing for the fees to be avoided.

Before The Contract update, if the player remained in the same session beyond one day (48 minutes) and then registered, the fees would immediately be charged and removed from their bank account. 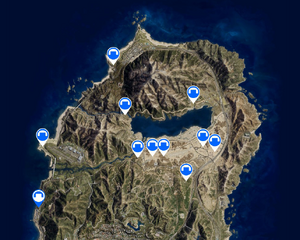 * Set by default on the initial purchase. Only charges when switching back during the renovation.

Bunker properties cannot be sold. Players can relocate to a different bunker location, but only a few things will transfer to the new location.

The Vehicle Workshop and mechanic.