Franklin and Lamar (with the Special/Collector's edition; Original version)

No
“More than makes up for its slow, pump-action rate of fire with its range and spread. Decimates anything in its projectile path.”
— Ammu-Nation and Social Club description.

The weapon is based on the Kel-Tec KSG, only having a boxier profile. The Bullpup Shotgun comes with picatinny rails on the top, sides and bottom of the weapon and what appears to be two independent tubes right below the main barrel. In the enhanced version, the weapon gains two iron sights, a prominent feature of the KSG.

According to the markings, the weapon is property of the United States Government.

Most of the Bullpup Shotgun' statistics are exactly equal to that of the regular Pump Shotgun, if not similar in other factors.

The damage per pellet is a mediocre 14, but if all pellets hit the target, can go to a full 114 damage. This is a rather low damage profile, and it is advised to aim towards the head in order to have more chances to score a one-hit kill. Even worse, the delay between two shots is a full second, making the fire rate a maximal 60 RPM, which is outclassed by the pump shotgun. However, the Bullpup Shotgun has a higher capacity (14 instead of 8), and may be improved with a grip that the regular shotgun cannot have. For this reason, accuracy is slightly better than that of the regular shotgun, when upgraded.

The grip is a helpful attachment to increase the accuracy, and allow more pellets to hit a target. The flashlight can help during nighttime engagements. The suppressor, however, is not recommendable, as it worsens the weapon's damage profile which is already low, as well as the range.

Being a rather well-rounded firearm and available after completing the second mission of the main game, it can be used to the player's advantage during missions such as Repossession or The Long Stretch. 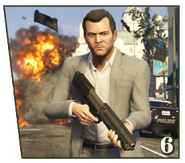 Franklin with his Bullpup Shotgun.

The Bullpup Shotgun at Ammu-Nation.