"They don't make 'em like they used to. Which is why Vapid designed the retro-classic Bullet based on the racing cars of the 1960s, back when nobody gave a crap about carbon footprints or the Ozone layer."
―Legendary Motorsport description.

The Bullet's design closely resembles a Ford GT. However, the Ford GT was not introduced until 2002, ten years after the game takes place, but the original GT40 model was manufactured from 1964 to 1969. The Ford GT40 was used as a racecar in the 1960s, but bears less resemblance to the Bullet.

In a beta screenshot of GTA San Andreas, which can be found in Otto's Autos, the Bullet is seen with a double stripe and a different hood, identical to that on the real Ford GT, the beta model is also portrayed in some renderings inside of Otto's Autos, a showroom in Downtown San Fierro.

Named Bullet GT in The Ballad of Gay Tony, the car shares similar design cues with the Ford GT, such as the waterfall hood scoop and body shape. Unlike the GT40 and GT, the Bullet GT does not feature a rear-hinged rear body section. The lower air ducts on the side of the car and louvers over the rear windscreen are similar to those featured on the Lamborghini Miura. In addition to this, the positioning of the exhaust tips is similar to that of the Miura. Plus, the taillights have a similar appearance to the 1999-2002 R34 Nissan Skyline. The plush interior is derived from the Grotti Turismo and features sport bucket seats finished in tan leather. The Bullet GT shares the same rim design with the Infernus, except it has grooves down the middle of each spoke (the Infernus does not have this).

Much like various newly designed cars in TBoGT, the car lacks external badging indicating its manufacturer; however, the title "Vapid" is emblazoned above the glove compartment inside the car. In addition, police chatter refers to the car as a "Vapid Bullet GT".

The Bullet returns in Grand Theft Auto V. Despite the vehicle returning unchanged from TBoGT, it is named as in GTA San Andreas, lacking the "GT" nomenclature. Both the TBoGT model and the GTA V model are virtually identical in performance and aesthetics, except for the rims, which are the same as those of the Surge.

As the name implies, acceleration, speed, handling, and braking are among the best in the game. The Bullet is the third fastest car in GTA San Andreas, the first being the Infernus, and the second being the Turismo. Following the Bullet in speed is the Cheetah and Hotring Racer. Steering is very sharp and it has a fun, but still safe, oversteer. The car feels very lightweight and nimble. Acceleration is almost as good as the Infernus (which is the fastest car in San Andreas). Braking is excellent. The only real sacrifice is susceptibility to intense damage upon impact, especially at the excessive speeds the vehicle is capable of reaching. Even though it is able to reach almost the same speed as Infernus, it is more controllable. Because of this, sometimes it is better to use Bullet during races, as at high speed the Infernus may spin uncontrollably, while a Bullet will remain under control. The vehicle is mid-engine, and has a rear-drive layout. A closer look at the engine shows six injector trumpets, suggesting that the engine is actually a V6.

The Bullet is a supercar, but strangely it has the same engine sound as classic middle power cars like the Oceanic, the Tornado and the Glendale.

The Bullet GT has a very high top speed. It is possibly one of the fastest cars in The Ballad of Gay Tony (single player), almost beating the Comet, but it still cannot beat out the Comet's sheer speed. This corners in a well-balanced manner, as a result of the low-profile tires and mid-engine layout. However, care must be taken while driving in the rain because of the high torque and rear wheel drive; the car will often lose traction and may over-steer. The Bullet GT is also fairly durable compared to other super cars.The Bullet GT's engine is in fact the same as the Turismo's; if the player looks closely, they will notice the engine cover displays a "Turismo" logo. The engine seems to be a DOHC V8, similar, if not identical, the the one in the Turismo. Similar to the Infernus, Buffalo, F620, Sultan RS, and Banshee, the Bullet GT is prone to backfire from its exhaust, either when changing gear or in the higher RPM ranges.

The Bullet still handles fast, but it is the second slowest supercar in the game, only faster than the Voltic. The Bullet is more comparable to sports cars rather than supercars. Most of its acceleration and top speed properties have been carried over from TBoGT.

The engine is stated to be a 5.6L engine, and again the engine seems to be a DOHC V8 placed longitudinally, in a rear-mid engine, rear wheel drive layout. The vehicle appears to use two textures of twin-cam engine covers, indicating the use of quad cam (twin cam in the case of a V8 engine found here) technology. One of the special features of this vehicle is its unique modeled differential and gearbox located in the rear compartment.

Its engine sound is similar to that of the Tornado.

The Bullet can be modified at TransFender: 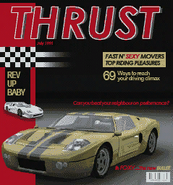 The Bullet on a Thrust magazine.

Beta model of the Bullet. 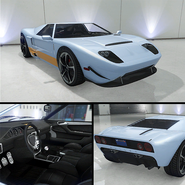 The Bullet on Legendary Motorsport.

The Bullet on the Rockstar Games Social Club. 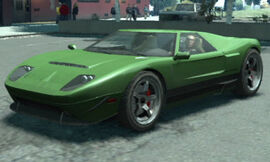 Green Bullet GT which can be found in triathlons.

Retrieved from "https://gta.fandom.com/wiki/Bullet?oldid=1168837"
Community content is available under CC-BY-SA unless otherwise noted.