Bull in a China Shop

View source
watch 02:46
The Quarry - The Loop
Do you like this video?
Play Sound
For the achievement/trophy in Grand Theft Auto: Vice City - The Definitive Edition, see Bull in a China Shop (Achievement).

Bull in a China Shop

Niko throws a brick at a shop window after initially failing to convince the shopkeeper to pay protection money to Vladimir Glebov.

Hung Out to Dry

Bull in a China Shop is the first mission in Grand Theft Auto IV given to Niko Bellic by Vladimir Glebov to collect some overdue protection money. It introduces hailing and using taxis and throwing objects.

After receiving a phone call from Vlad to work for him, Niko meets Vlad at the Comrades Bar over on Mohawk Ave (across the street from the Hove Beach safehouse). During a cutscene, Niko and Vlad converse. Vlad, despite repeated insults, actually seems to like Niko, and trusts him enough to send him out on a mission. Vlad asks Niko to deal with a china shop owner who owes Vlad protection money. Vlad asks Niko to not hurt the man, but to get the money. Vlad offers Niko a baseball bat to intimidate the shop owner, but Niko declines it, arguing that he has other ways of going about it.

After the cutscene has finished, the player will head over to the China shop in Cerveza Heights, located on Huntington Street. The mission offers the player the opportunity to take a taxi ride instead (with a Taxi appropriately appearing in front of the player), but the player can also drive there by themselves. When the player arrives at the yellow marker, the door is locked and the owner is refusing to pay up.

Find something to throw through the shop window.

Throw the object through the window to show the owner you're serious.

Take the money back to Vlad.
Waypoint: Comrades Bar, along Mohawk Avenue in Hove Beach, Broker

The man will soon agree to pay out in fear. Niko then takes the money to Vlad who is in Comrades Bar. The GPS will, once again, get the player to the location easily. Vlad will reveal that the shop owner is dealing in illegal businesses back in the East of Asia, when he states: "Stupid jerk made a mistake telling me how much he gets that shit for back east. He's the biggest crook in the whole neighborhood. Luckily I don't tell his customers what they're paying for." 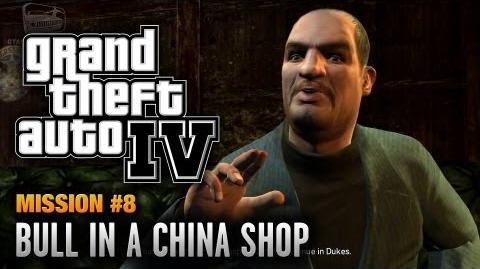