van_1_eur_4cyl
“Forget those mainstream firemen and the lifeguards. Be an alternative hero in your own Bugstars brand Burrito. Whether you relish the smell of fumigation agents or are looking to repurpose a classic Declasse like the grubby hipster you are, you'll find yourself in a vehicle that can be enthusiastically described as 'capable'.”
— Warstock Cache & Carry description.

The vehicle is essentially a second generation Burrito with a Bugstars livery that cannot be changed or removed, consisting of a blue color with an orange stripe at the bottom, as well as various company markings on the hood, doors, sides and rear doors. It has several tool boxes in the rear compartment, which is different from other Burrito variants.

Compared to the other vehicles, the Bugstar Burrito has a relatively special color distribution. The primary color of the vehicle is applied to the inner frames, while the secondary color is applied to the body, which can alter the livery's appearance.

The Bugstars Burrito cannot be modified in Grand Theft Auto V. However, it can in GTA Online, although with basic options. It once could be resprayed upon its release, yet for unknown reasons, the respray option was made unavailable in a later update.

The Bugstars Burrito shares its handling with the regular second generation Burrito; it is, as expected, slow to accelerate, but maintains a relatively high top speed and handles relatively well compared to the likes of the Pony and Speedo. It is comparably lighter than most other vans in the game and is not able to ram other vehicles out of the way without a significant reduction in speed, often completely hauling the vehicle, making it vulnerable during pursuits and drive-by situations.

The vehicle sports a four-cylinder engine model laid transversely in a front-engine, rear wheel drive configuration, coupled up to a five-speed gearbox. 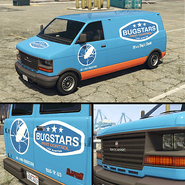 The Bugstars Burrito on the updated Rockstar Games Social Club.

Inside the rear of the Bugstars Burrito.