Standard White - 100%
“Forget whatever you think you know about keeping it in family. Sure, the Buffalo and the Gauntlet were closely related. But in the grand old state of San Andreas, if two first cousins want to get to know each other better over a cup of engine oil that's none of the government's business, especially if the children are this good-looking.”
— Southern San Andreas Super Autos description.

The Bravado Buffalo STX is a 4-door muscle car featured in Grand Theft Auto Online as part of The Contract update.

The Buffalo STX is primarily based on the 2015-present Dodge Charger (LD). The majority of its design remains faithful to the Charger, with the front and rear bumper designs taking inspiration from the SRT models; likewise, the wheels are based on those found on the 2020 SRT Hellcat Widebody. The differences between the Buffalo STX and Charger are the altered bodywork towards the C-pillar and the exclusion of quarter windows in the rear doors, as well as the LED strips on the headlights being positioned outward instead of being inward as its real-life counterpart. The tail light shape is that of the 2013-2017 SRT/Dodge Viper (VX I). The hood might have been inspired by the 2015–2020 Shelby GT350 (S550), while the side vents bear a resemblance to the ones found on the BMW M3 (F80) and BMW M4 (F82/F83).

The vehicle is depicted as the newer iteration of the Buffalo and the Buffalo S, retaining the general body shape and features. The front fascia of the car features a large central intake that spans about two thirds of the car's width and features a black/plastic frame on the upper portion, followed by smaller intakes intended to cool off the front brakes. On the upper area, there is a narrow grille that bears the Bravado emblem and two black intakes, while the headlights consist of circular units and modern LED-like strips. The hood has an elevated shape around the center and bears a small intake.

On the sides, the car has distinctive lines at the bottom and angled side skirts, while the front fenders have small exit vents with a single black separation. Additional body lines are seen around the front exit vents and lead towards the rear end, almost parallel to the waist lines, while the doors have painted handles. The greenhouse area makes use of black trims around the windows, with additional lines separating the roof panel from the rest of the car.

On the rear end, the car has a small trunk lid with a lip spoiler on top, along with a black panel that spans the entire car's width and passing through the trunk lid. This black panel house the Bravado badging on the center and the tail lights on the outer edges, the latter consisting of outer red units split between the outer brake lights and inner main light, as well as inner units split between the outer indicators and the inner reverse lights. The bumper is relatively bulky and has narrow exit vents on the edges and a rectangular section on the center holding the license plate, while the bottom area features a black/plastic section with a central vent, four diffuser blades and mouldings for the exhaust pipes.

Its interior is a four-door derivative of the one from vehicles such as the Specter, the Dominator GTX and the Gauntlet Hellfire, with the Bravado emblem on the horn cap.

The primary color of the car is applied on the bodywork, while the secondary color is applied on the overstitches of the interior. A trim color is also available for the dashboard, part of the door panels and the inner portions of the seats. The car uses a set of 5-spoke dual rims, fitted with low-profile tires.

The overall performance of the Buffalo STX is on the top pace for the Muscle class, even rivalling some vehicles in the Sports class. It has a high top speed and excellent acceleration that on par with the Gauntlet Hellfire, with a braking power that slightly better than the said vehicle. It also has a stable handling like the Dominator GTX, making it does not lose traction upon hard cornering at high speeds and even spin out like other muscle cars.

The vehicle is powered by a single-cam V8 engine that is fitted with a supercharger, coupled to an 8-speed gearbox in a front engine, rear wheel drive layout. Its engine sound is mainly derived from the Buffalo S and the Sprunk Buffalo, but adds a supercharger whine sound from vehicles such as the Tampa and its Weaponized variant.

The Buffalo STX, along with selected vehicles from the same update, can be modified with a Remote Control Unit, which allows to drive the vehicle remotely, similar to the RC Bandito and the Invade and Persuade Tank. Note that the camera is always set to first-person view, and cannot be kept if the Missile Lock-on Jammer is installed.

When the Armor Plating upgrade is equipped, the vehicle adds armor paddings on the sides in a similar manner to the armored vehicles featured in the Executives and Other Criminals update. However, it gives a much higher resistance to explosives in general. It also has bullet-resistant windows, which are able to withstand 15 rounds from most firearms before being shattered.

The Buffalo STX, along with selected vehicles from the same update, can be modified with a Missile Lock-on Jammer, which prevents the lock-on system of the Homing Launcher and other weaponized vehicles to target onto it. Note that it cannot be kept if the Remote Control Unit is installed.

A Buffalo STX in the advert promoting the Imani Tech Week event. 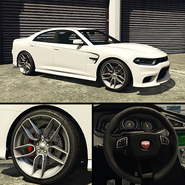 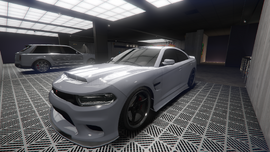