Buffalo (In-game name, prior to "I'm Not a Hipster" Update)

Formerly known as the "second generation" Buffalo, it is the facelifted version of the existing Buffalo, with a supercharged engine, new front fascia, rims and tail lights, mainly based on the 2012-2014 Dodge Charger SRT8. The tail lights are based on the Acura NSX concept.

The Buffalo S has a much more aggressive appearance, giving it the look of the modern American sports car. The front fascia consists of a single chrome grille and a set of dual headlights and turning signals, one large intake on the center and two smaller ones near the tyres. A plastic separation can be found at the center, following the shape from the rest of the car. The hood features a wide bulge that starts from around the middle of the same.

On the sides, there are two small plastic panels on the front fenders bearing silver "Supercharged" lettering, as well as flat skirts with ridged details above them. The greenhouse area features plastic trims around the windows and two rear-view mirrors housed in shells with the upper half colored and the lower half finished in platic.

The rear of the car remains largely the same, except for the tail lights, consisting of a single red strip connecting the two sets from the outer edges. The portion below the central light stripe is finished in plastic, with the manufacturer emblem on the center. The rear bumper houses the rear plate and a plastic diffuser, along with the dual circular exhausts.

The car is prominently painted in a primary color for the body, with the hood bulge and roof painted in a secondary color. It uses a unique set of ten-spoke rims sharing a similar pattern to the "Mercie" sport rims seen in Los Santos Customs, with a more straighter appearance.

The Buffalo S improves upon the regular Buffalo with slightly better acceleration and top speed. Outside of that, it remains mostly a half-decent car. It lacks in both acceleration and top speed when compared to other Sports cars. Its handling is remarkably boatish, lacking in response time and cornering radius. What it does right, however, is remaining stuck to the ground; the Buffalo S is a very hard car to spin out, and when it does spin out, it is also a very easy car to correct. Braking power is great and reliable. Crash deformation is acceptable, being able to shrug off a mild beating, but otherwise will fail after a decent number of hits.

Like the Buffalo, the Buffalo S is powered by a twin-cam, straight-4 engine, coupled to a 5-speed gearbox in a front-engine, rear-wheel-drive layout. It produces a very aggressive sound, being a high-revving sound similar to the Gauntlet and the Picador. 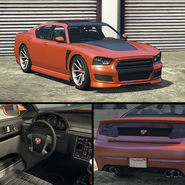 The Buffalo S on the updated Rockstar Games Social Club. 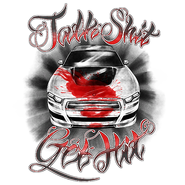 A Buffalo S on a graphic of Talk Shit Get Hit Tattoo in Grand Theft Auto Online. 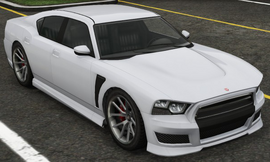 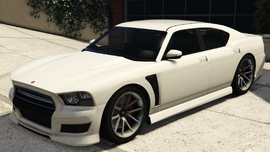