GTA Wiki
Register
Don't have an account?
Sign In
Advertisement
in: Vehicles, Vehicles in GTA San Andreas, Vehicles in The Ballad of Gay Tony,
and 7 more
English

Standard White - 50%
“The Bravado marketing department know just what we need - another resurrected 1960s muscle car for the over-muscled EDM generation. It's a vehicle with aggressive lines for aggressive drivers.”

The Buffalo in Grand Theft Auto: San Andreas appears to be mainly based on the third-generation Chevrolet Camaro, but there are influences from other vehicles. The headlights are similar to an Opel Manta B2 and the third generation Honda Integra, while the shape of the tail lights looks closer to some third-generation Pontiac Firebird models. A C-pillar has also been added, bearing a resemblance to a Dodge Daytona.

The Buffalo is characterized by the small front intake, the four circular headlights and the ram air hood, along with a lip spoiler, rectangular tail lights and a bulky rear bumper. It spawns in a a variety of single colors.

The Buffalo in The Ballad of Gay Tony is strongly based on the 2006-2010 Sixth generation Dodge Charger, as well as the Ford Mustang GT for the greenhouse area, front fascia and headlights, whilst the tail lights appear to be based off the first generation Chrysler 300C, albeit with slightly different proportions to compensate for the Buffalo's different body style. The custom body kit suggests it is based on the Charger's SRT-8 model.

The vehicle is essentially a consumer/civilian version of the FIB Buffalo, which was already introduced in both Grand Theft Auto IV and The Lost and Damned (despite there are numerous billboards advertising a civilian version of the car). It features a custom body kit that includes larger exhaust tips and ground effects. The car spawns in a variety of single colors and shares the same 5-spoke rim design with the Rebla.

The Buffalo is equipped with a GPS system with a female voice, but only if the player leaves the "selected cars" (default) option in the audio menu.

The Buffalo returns in Grand Theft Auto V and Grand Theft Auto Online, having the same design as the TBoGT model. Its interior uses the same interior from cars like the Stanier and the Taxi. It also retains the single body color and the 5-spoke rims.

The car is laid out in an FR layout, and sports a high-performance V8 engine that delivers great acceleration and speed, but comes at the cost of high rear end power, which may lead to loss of traction. Despite being a sports car, the Buffalo handles very well off road, making it a spectacular cross-country vehicle.

The Buffalo shares its engine sound with the Alpha and the Infernus.

The Buffalo's performance is very good for a four-door sedan, courtesy of its supercharged twin-cam inline-4 engine, which is superior to its law enforcement variants. As expected, the car is capable of good acceleration and a decent top speed, with its powerful engine coupled up to a 5-speed gearbox in a FR layout, because it is being lighter than the FIB Buffalo. While the car is still prone to fishtailing, the car's grip on the road is equally excellent. Durability is great, making it take crashes and gunfire very decently. However, the wheels are not very durable, as these would be easily deformed on high-speed impacts. Because of the low ground clearance, the Buffalo might fail at sorting out obstacles on the way, though it may handle most bumps and curbs without any trouble.

Like the Infernus, Banshee, F620, Sultan RS and Bullet, the Buffalo backfires from its exhaust when shifting gears. Rather than the loud engine sound from the FIB Buffalo, the Buffalo shares the same high-revving, high-pitched engine sound as the Police Stinger.

The Buffalo retains its mostly-good performance, having an acceptable top-speed, and average acceleration. Thanks to its sturdy front structure, the Buffalo can cope with several head-on crashes before the wheels make an average negative-camber. The braking distance is among the best in the class, and still performs just as good in wet weather, thanks to its thick tires, and its firm brake disks. The engine powering the car is a supercharged twin-cam straight-4, being situated at the front, and having a RWD drivetrain, an average layout for sports-sedans. Its engine sound is low-revving and rather smooth, also used on the Jackal and the modern Police Cruiser.

The Buffalo's engine and RWD drivetrain works hard to propel it off the line, making for an impressive top speed and 0-60 time. The engine gives the car more get up and go, which makes the Buffalo a faster vehicle than one would assume. Its handling feels more sport-like, and combined with a firm suspension and good traction, the Buffalo can easily be thrown around curves and sharp turns at high speeds, and also makes the Buffalo a rather fun and exciting vehicle to drive. The Buffalo has good traction on and off road, and allows it to climb steep grades and enables it to go significantly off road, despite its RWD drivetrain and lower ride height. Braking feels strong and is excellent for a vehicle its size, enabling the Buffalo to come to a complete stop in a shorter amount of time compared to other vehicles in its class. Crash deformation is also impressive, allowing the Buffalo to take multiple direct hits before the engine erupts in flames. Overall, the Buffalo is well rounded and balanced, making it an excellent choice for a getaway vehicle, especially during hot pursuit.

While absent in GTA IV, a billboard advertises the stock model of the Buffalo. On closer inspection, the pictured Buffalo features grill-mounted lights from an FIB Buffalo.

Buffalo with no bumpers & side skirts by glitch or bug. (Rear quarter view). 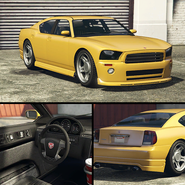 The Buffalo on the updated Rockstar Games Social Club.

The Buffalo in the cinematic preview on GTA V Rockstar Games Social Club.

The Buffalo in the cinematic preview on GTA Online Rockstar Games Social Club.

Eddie Pulaski owns a white Buffalo. The colour is not unique but it has a unique licence plate which reads, PULASKI. It is fully immune to damage before Pulaski enters it.

Mori Kibbutz owns a unique red Buffalo that can be found in Kibbutz Number One. To obtain it, the player can take it to the parking space in Niko's South Bohan safehouse and kill Mori, this will cause to fail the mission but the car can be saved. Another method without failing the mission is to reach the destination in the map, let Mori get off and then the player can take the vehicle to the South Bohan safehouse and proceed with the mission.

It is also found in the mission This Ain't Checkers, Mori's red Buffalo, along with the other 3 cars available, is equipped with Nitro to help the player win the Triathlon set up by Mori.

At the start of the mission Bang Bang, the player has the choice between Tony's black Schafter or a unique blue Buffalo. This Buffalo is presumably Evan Moss's car as he is the only person in the apartment other than Tony and this is the only time the Buffalo is seen.