"With the kind of pedigree that just screams 'organized crime', the Buccaneer has always been the vehicle of choice for thugs with delusions of grandeur. But while the mobsters of yesterday had to settle for being classy and understated, today you have access to the kind of modification that will make you a target for racially motivated policing across the length and breadth of San Andreas. Eligible for customization at Benny's Original Motor Works."
―Benny's Original Motor Works description.

The Buccaneer is based on a 1970-1972 Chevrolet Monte Carlo (probably the 1972 model, as it does not have turning signals on the bumper). Its design resembles that of the Picador, as both cars take inspiration from vehicles built upon the Chevelle platform.

The Grand Theft Auto IV rendition of the Buccaneer resembles the 1971-1973 Buick Riviera, while it still broadly draws inspiration from the 1970-1972 Monte Carlo (although it has lost much of its fastback profile and has exaggerated proportions), but is also influenced by other vehicles. The front end looks closer to that of the 1974 Chevrolet Caprice and even more so 1974 Cadillacs because of the inclusion of a hood ornament.

The vehicle shares some similarities with the 3D rendition of the Tampa, and also the GTA IV rendition of the Emperor. Oddly, despite being manufactured by Albany, the steering wheel bears a Declasse emblem.

The car is always set to spawn in a single-tone color, and various chrome details can be seen on it, namely the sides and around the windows.

The Grand Theft Auto: Chinatown Wars rendition retains the Monte Carlo influences from GTA IV, leaning more towards the design of the GTA San Andreas rendition, although it is far shorter than both its previous renditions. Its wide headlights echo the double headlights of the GTA IV rendition.

The Grand Theft Auto V iteration of the Buccaneer strongly represents the 1963-1965 Buick Riviera for the body style and the front, specifically the 1965 model (as the stacked headlights were only in that model). It also appears to draw inspiration from both the first generation Pontiac Grand Prix for its headlights, 1966 Pontiac GTO for the grille unit, and the '67 Pontiac LeMans for the vinyl roof. It also shares some styling with the 60's Ford Fairlane. The rear of the vehicle is reminiscent of a 1966 Chevrolet Chevelle SS.

The Buccaneer's design is changed completely from GTA IV, featuring an older appearance with a raised rear suspension, giving it a dragster-like style. The front of the car is predominated by the split grille in the center, with the stacked circular headlights located on the outer edges and surrounded by chrome details and located in black housings. A chrome bumper spans the width of the car and follows the curvature of the outer edges.

On the sides, chrome details can be seen on the wheel arches and the bottom of the sides and rear, as well as classic circular mirrors near the cabin's A-pillars, also finished in chrome. The cabin is mostly covered by a soft top, featuring chrome trims around the windows

The rear of the car features square, concave-folded tail lights and inner reverse lights, with a black matte strip running along the back of the trunk connecting the two and surrounded in chrome. The trunk displays the car's name with chrome letterings embossed above the black strip, and a rear bumper covers the width of the car and also follows the curvature of the outer edges.

The primary color of the car is applied on the upper half, while the secondary color is applied on the lower half. The stock wheels are identical to the "Dukes" rims also available at Los Santos Customs, although it gives the wheel color a darker tone.

The Picador slightly outperforms the Buccaneer in acceleration and handling, but the Buccaneer has a higher top speed. Despite its lowrider-like appearance, it can only be modified at TransFender. It houses a high power and torque large displacement V8 engine under the bonnet of the car.

The Buccaneer is a fairly heavy car, needing a large V8 to lug around its portly weight, however its cornering is acceptable at low speeds. Its back end is prone to fishtailing when cornering at high speeds. Its top speed is relatively low.

The Buccaneer, despite being based on a heavy luxury coupe, possesses one of the highest speeds of all the muscle cars, reaching about 110 mph on the first person speedometers. This is not a very big advantage however, as muscle cars such as the Dominator and Dukes are marginally slower. Braking is acceptable, but nothing too spectacular or noteworthy. Having a decently powerful V8 under the hood, acceleration is average, achieving 60 mph in the 5 second range. GTA V's Buccaneer sports '440 GT' badges, suggesting that the engine has a displacement of 440 cubic inches (7.2 litres). The Buccaneer is able to go through most corners without spinning out, and oversteer is quite minimal, which is surprising for a vehicle of its size and weight. Overall the Buccaneer is a solid muscle car, where despite having a high top speed in its class, the rest of the car is common within the category.

A wreck found in South Bohan, similar to the Buccaneer and Esperanto. Possibly a leftover beta model.

The Buccaneer on the updated Rockstar Games Social Club.

The Buccaneer in the cinematic preview on GTA V Rockstar Games Social Club.

The Buccaneer in the cinematic preview on GTA Online Rockstar Games Social Club.

A Buccaneer featured in Body, a painting by Kröger at The Diamond Casino & Resort.

In Grand Theft Auto V, there are unique Buccaneers belonging to the Los Santos Vagos, Families, and Ballas gangs. These gang variants are customized with the following modifications:

Gang members will open fire on the player if he/she attempts to steal one of their cars. If Franklin steals a Families Buccaneer, he will be ignored. The same applies for the GTA Online Protagonist, although care must be taken as players may sometimes get a bounty if stealing a Families' Buccaneer. The gang variant of the Buccaneer in GTA Online nets the players $9,875 in Los Santos Customs upon selling it. 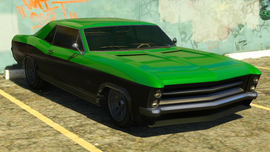 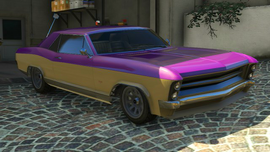 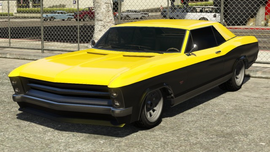 The requested Bucanneer in Stevie's Car Thefts in GTA IV.

Retrieved from "https://gta.fandom.com/wiki/Buccaneer?oldid=1272109"
Community content is available under CC-BY-SA unless otherwise noted.