Brucie
Baby B
Little B

He is also mentioned in The Lost and Damned and Grand Theft Auto: Chinatown Wars.

Kibbutz is a luxury automotive entrepreneur, fitness enthusiast, and lifestyle coach. He is also a frequent user of steroids and possibly a closeted bisexual.

Bruce Kibbutz was born in 1977. Brucie occasionally mentions to Niko that he was once a "fat loser" that "no girl would want to date." In the mission Search and Delete, he awkwardly claims that if he were gay, Roman would be in big trouble, but then quickly states he is only joking about being attracted to Roman. He also makes a definite point of saying to Niko "Brucie likes pussy... remember that, all right?"

Brucie indulges in what he calls "juicing" - injecting testosterone allegedly taken from Chilean bull sharks. It has led to excessive roid rage, and may account for Brucie's overactive excitement in most situations. He is a steroid user and possibly a dealer of performance enhancing drugs, something that has resulted in a few encounters with law enforcement.

In The Ballad of Gay Tony, Brucie's older brother Mori Kibbutz is introduced. Mori ridicules Brucie to no end, even now that they are both adults. During his appearances in Mori's missions, Brucie's arrogant, self-absorbed and egotistic lifestyle is revealed to be the result of living in his older brother's shadow, Mori constantly putting him down and becoming overly competitive. More than once, this results in Brucie quietly sobbing to himself. His bisexuality is also more outwardly hinted at, most significantly in the mission Ladies Half Price when he awkwardly tries to kiss Luis, even though he very quickly covers his tracks, claiming that he was just checking to see Luis wasn't gay. He also denies his bisexuality in an e-mail he sends to Niko if the player wins a race in GTA IV. However, Brucie indicates his potential bisexuality to Niko numerous times in the game, occasionally asking Niko to touch a part of his body to feel how "perfect" it is or saying things like "I'd love to eat with your ass, bro. Not your ass, with your ass." when asked to go out on a friend activity.

Brucie is a successful entrepreneur who runs Brucie's Executive Lifestyle Autos, a garage situated in East Hook, Broker. He makes a point of flaunting his money and has even started his own website called Brucie's Executive Lifestyle, the actual purpose of which is unknown, but which seems to be a combined blog/lifestyle guide. Brucie is a V.I.P. at Maisonette 9, and has his name laminated on the guest list (it is implied Roman does as well). His favorite place to eat is at the Superstar Café.

Being in the business of cars (importing and exporting, customization, etc) provides him many luxury and sport cars for his own use. Two of his own vehicles, a Banshee and Huntley Sport, have a black and gold color scheme. In addition, he owns a Squalo powerboat and a Maverick helicopter, both for purposes of entertaining women and friends. He is a womanizer, and is openly disrespectful towards women; it is implied that they are only drawn to Brucie because of his vast fortune, which he uses to take them on power-boating and helicopter rides throughout Liberty City. 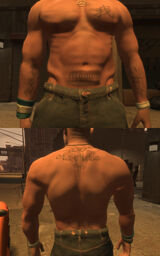 A half of Brucie's Chinese tattoos are derisive, indicating that he might not have a clear knowledge of Chinese when he got them.

He doesn't physically appear in The Lost and Damned, but it is possible to hear his voice in Liberty Rock Radio, and the radio host will make a mark of his use of steroids by saying "Be genetically different baby". Roman also mentions him in the mission Roman's Holiday when he exclaims that he's "Sorry for laughing at Brucie's balls!"

Brucie is one of the few characters from the original GTA IV that actually engages with Luis in extended dialogue, often appearing along with Roman either inside, or trying to get into Maisonette 9. During the missions for Mori Kibbutz, light is shined on Mori and Brucie's relationship as brothers, mostly consisting of Mori ridiculing Brucie at every turn, with Brucie refusing to stand up to him until the end of No. 3, where Brucie, having taken enough abuse, breaks Mori's nose, finally besting his brother.

Towards the end of the game, Brucie awkwardly attempts to kiss Luis, but later denounces it as a test of Luis' masculinity (see above).

Circa 2013, Brucie has become the spokesman for Bull Shark Testosterone supplements. The player can look at the website for Bull Shark testosterone and even hear a Weazel News report about the effects of Bull Shark testosterone, both of which mention Brucie as the spokesman. Brucie is also an avid bleeter and his bleets can be read with new ones being posted throughout progression of the storyline, with bleets covering on his life and give-aways on calendars from 2012 that feature pin-ups of himself. His Bleeter profile picture and website picture shows his appearance to be different from GTA IV as he now sports a different shaped head, a goatee and looks quite a bit older, probably due to artificial tanning and steroid abuse. It is implied also that his car is stolen by Lamar Davis in a deleted mission, though it is likely that he still had his car stolen offscreen.

Brucie appears in GTA Online and contacts the character after they reach rank 17, informing them that he will order Bull Shark Testosterone of which the player can then phone Brucie for him to deliver.

By 2019, Brucie has apparently relocated to Los Santos. He responds to an ad at The Diamond Casino & Resort for a personal masseuse/fitness aide to its then owner Tao Cheng. Brucie soon has the young Triad on a schedule of intense work outs and Bull Shark Testosterone. Unintentionally, the supplements make Cheng highly aggressive and spark a war with Avery Duggan and his potent private security force. Brucie stays in his post throughout the ensuring conflict between the resort and the Duggan family. At the end of the conflict, Tao sells the Casino & Resort and boards a plane to return to China. It is unknown what became of Brucie.

At some point after completion of the mission "No. 1" for Brucie, he will call the player to do some activity with them and it's possible to become friends with him. The player can do most of the activities with him that are available for other friends (except playing pool or darts), and he has two unique activities: Heli Rides, and Powerboat Rides.

Brucie is one of five friends the player can make within Grand Theft Auto IV and he's usually available between 7 AM to 1 AM.

When the player gets above 75% in Brucie's Like Stat, they will gain his Special Ability which is being able to get him to transport the player anywhere by helicopter. This will add a Chopper option in his entry in the Phonebook.

Brucie and his Banshee: "The Bitch".

Brucie with his shirt off, notice his tattoos.

Brucie's profile photo in GTA V.
Add a photo to this gallery

Retrieved from "https://gta.fandom.com/wiki/Brucie_Kibbutz?oldid=1198379"
Community content is available under CC-BY-SA unless otherwise noted.