The Brown Streak bears a striking physical resemblance to the EMD F40PH.

The Brown Streak features a long chassis with a set of twin-axle bogies and large defenses with couplers mounted on both ends, as well as access steps on either side. The front section of the locomotive consist of a large nose with square headlight units on the lower corners (that light up at night), circular units on the upper center and small steps, while the cabin area features dual windshields, access doors with grab handles on either side, and two signs above, always bearing the running number "309". The rest of the locomotive consists of the engine, featuring large compartments and vents on either side of the upper area, along with three cooling fans and a small exhaust on top. The rear end has access steps on the outer edges and appears to lack physical tail lights, nor any light source activated at night. The locomotive is operated by the Brown Streak Railroad, thus bearing the corresponding logos. It only spawns in an all-white color, with the primary one applied on most of the locomotive's body and the secondary one on the roof area.

The player can either ride in the train as a passenger (free of charge) by entering through the side doors of one of the rear coaches, or steal the train by entering the locomotive up front, assuming control of the train themselves. When riding as a passenger, the player may exit the train at any stop (or during travel, if so desired). When driving the Brown Streak, the player has the option of engaging in the Freight Train Challenge side missions (only after unlocking the entire state).

Both the Brown Streak and the Freight have some realistic effects, particularly the ability to derail at high speeds.

The train begins to shake above 190 km/h (118 mph), at which speed it will derail upon turning (higher speeds are possible while traveling in reverse). It is immune to all forms of damage, including weapon damage, fire, and any physical obstruction; however, derailments will render it useless. There are no first/third person views when driving or traveling in the train, and the cinematic view is the only view available. 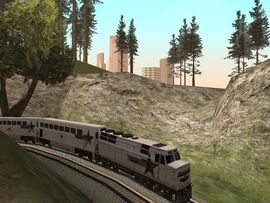 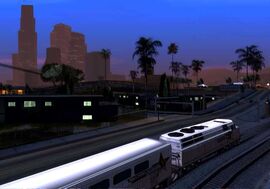 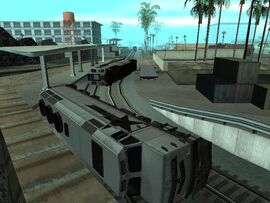 A derailed Brown Streak, with the passenger coaches behind.

Although it does not appear much throughout the storyline, it appears prominently in several missions.