The exterior of the safehouse as it appears in Grand Theft Auto IV.

Located just below an elevated railway line near the southern end of Mohawk Avenue in Russian-influenced Hove Beach, the apartment was Roman Bellic's initial place of residence (after spending a period of time living in his taxi depot), and was offered as a place of accommodation for Niko upon his arrival in Liberty City, to Niko's dismay (as he found Roman was not living in a mansion, as he had claimed in his many letters and e-mails).

During the mission "Roman's Sorrow", the apartment and Roman's cab depot are burned down by the Russians (it is revealed on the news that the arsonists used Molotov Cocktails). The two cousins then move to Bohan, where Roman's fiancée Mallorie offers them an apartment. While the Broker safehouse is effectively inaccessible after the mission, vehicles may still be stored at its parking space outside.

Despite this, it is possible to re-enter the safehouse. To do so, the player must get a small car (like a Comet) and get it sitting at the top of the staircase, and then get out. Niko will be teleported into the air and will land in the apartment. In order to exit the apartment, the player may start up the Sixaxis Tutorial or simply just kill themselves.

The safehouse is rudimentary, with a sofa bed which acts as a save point, a television, a dirty kitchen with a table, a radio (which is tuned into Liberty Rock Radio) and a wall with peeling wallpaper. Like most other safehouses in the game, there is no computer in the apartment. A design poster of a blue Banshee with a white stripe can be found in the house, as can numerous posters of scantily clad women. There is a picture of Mallorie Bardas, Roman's girlfriend, on the bedside table. There is another one photo of her with a younger and slimmer Roman in the commode nearby. There is an inaccessible door in the corner of the kitchen, presumably leading to the bathroom. The safehouse is very dirty, as shown when Roman first walks in and steps on a cockroach.

Grand Theft Auto: Chinatown Wars shows that the apartments have been transformed into a row of shops. It also shows that Roman's cab depot has been repaired, though it is unknown if Roman still owns the depot.

The safehouse on fire during "Roman's Sorrow".

The picture of Roman and Mallorie, in the Broker Safehouse. 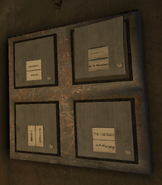 Mailboxes in the Broker Safehouse.
Add a photo to this gallery

Retrieved from "https://gta.fandom.com/wiki/Broker_Safehouse?oldid=1202723"
Community content is available under CC-BY-SA unless otherwise noted.