The Broker Bridge is a cable-stayed suspension bridge in Grand Theft Auto IV and Grand Theft Auto: Chinatown Wars, connecting the boroughs of Algonquin and Broker in Liberty City

It is the southernmost crossing of the Humboldt River, south of the Algonquin Bridge. The geography of the bridge (Broker Side) is similar to the Verazanno-Narrows Bridge but on the Algonquin side, it's in the similar location as the Brooklyn Bridge's northern terminus.

The Broker Bridge in GTA IV carries vehicles and pedestrians only. Vehicles access the bridge via the on-ramps on Masterson Street or directly from the Broker Bridge Approach Expressway, while pedestrians must climb up many flights of stairs on the massive stone foundations, accessible from Mohawk Avenue in Hove Beach at the Broker end, and just north of Pier 45 in Fishmarket South at the Algonquin end. Vehicles occupy two dual-lanes of traffic, while pedestrians use an elevated walkway in the middle.

Underneath the bridge is a skate park with several half and quarter pipes. A Flying Rat is located on the skate park.

Largely the same in GTA Chinatown Wars, the bridge connects Algonquin and Broker from Fishmarket South to Hove Beach. Unlike GTA IV, the center walkway is no longer accessible and is not seen with pedestrians crossing it. The bridge also features three suspension towers as oppose to GTA IV, and the real life counterpart, which features two.

According to the documentary, A History of Liberty City, construction began on the Broker Bridge after Broker residents complained of how rowing across the Humboldt River to and from Broker and Algonquin was abysmal. Manic-depressives had also complained that there was nothing tall enough in Liberty City to jump off of to commit suicide. Construction of the bridge caused organized crime to boom, and residents were given a new place to dump bodies. Similar to its real-life counterpart, wherein the Brooklyn Bridge was the site of the first bridge suicide. The bridge was built before the American Civil War while its real-life counterpart, the Brooklyn Bridge, was completed in 1883, 18 years after the Civil War finished.

Inside Drusilla's, Ray Boccino's restaurant, during cutscenes, an old picture of the Broker Bridge can be seen.

Tavell Clinton, from Los Santos, sprayed CGF on the bridge according to his Lifeinvader page in 2013. 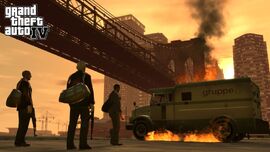 Niko, Packie and Derrick watch a burning Securicar in front of the Broker Bridge. 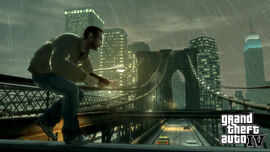 Niko creeping across the bridge on a rainy night. 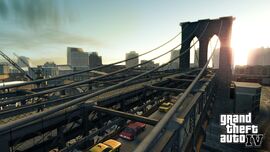 View of the Broker Bridge looking east towards Broker. 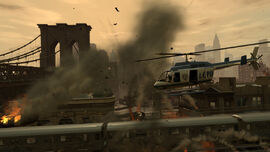 A Police Maverick tailing a train with the bridge in the background during For the Man Who Has Everything. 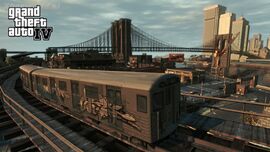 A train passes under the Broker Bridge. 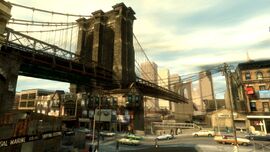 The Broker Bridge with Hove Beach in the foreground, becoming one of the most recognizable screenshots of GTA IV. 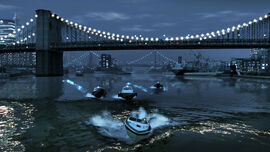 LCPD Predator's pursue Niko in a Tropic under the bridge. 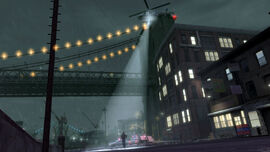 A Police Maverick shines its spotlight on wanted Niko with the Broker Bridge in the background. 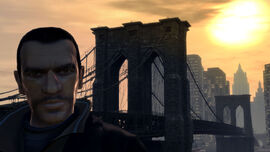 Broker Bridge with Niko in the foreground. 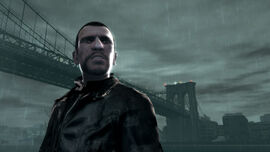 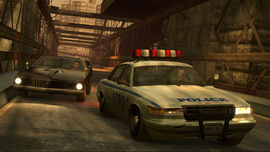 Niko in a stolen Police Cruiser along the bridge. 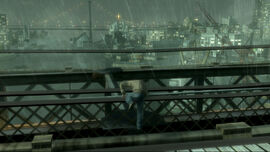 Niko climbing onto the bridge. 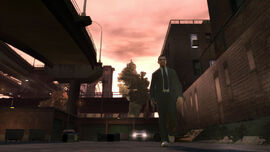 Niko walking away from a Faction in Firefly Projects, with the Broker Bridge in view. 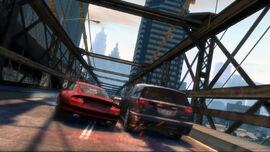 A Comet speeds through busy traffic on the bridge. 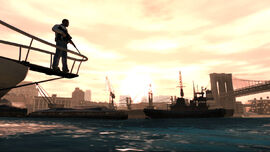 Niko stood on the pulpit of a Reefer overlooking the Broker Bridge. 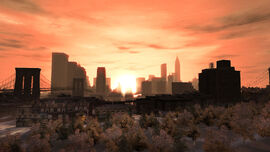 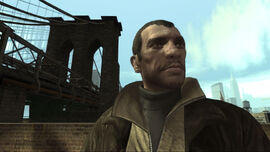 Niko in front of the bridge. 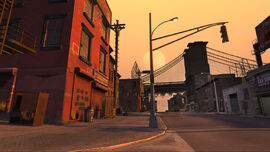 Perpendicular looking south from Hove Beach.
Add a photo to this gallery
In-game

As seen from Hove Beach.

Bottom of the stairways.

The landing passing over Borlock Road.

At the top of the stairways, facing towards Broker.

The skate park underneath the bridge in Fishmarket South.

The Broker Bridge seen on a dollar bill.

Aerial view of the Broker Bridge.

A lower view of the Broker Bridge in Grand Theft Auto IV.

The deck design of the bridge, with an elevated walkway and two dual-lane roadways, GTA IV.

Broker Bridge on Peep That Shit's "Soak in the Sights" section.
Add a photo to this gallery 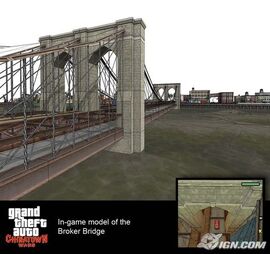 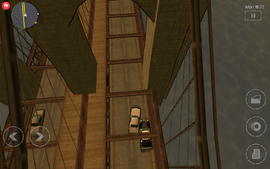 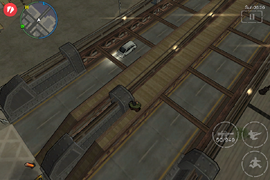 The Broker Bridge at the Algonquin end in Grand Theft Auto: Chinatown Wars.
Add a photo to this gallery

Retrieved from "https://gta.fandom.com/wiki/Broker_Bridge?oldid=1213685"
Community content is available under CC-BY-SA unless otherwise noted.