GTA Wiki
Register
Don't have an account?
Sign In
Advertisement
in: Characters, Characters in The Ballad of Gay Tony

The Ballad of Gay Tony
“Oh, Gawd, I do love a bit of yellow. Cunts like hyenas' jaws, don't you know. Not the big shark attacks you find on English girls.”
— The Prince.

British Prince is a minor character in The Ballad of Gay Tony.

The Prince is a member of the British Royal Family.

For one of the Club Management tasks, Dessie tells Luis that a "royal dude" in the club wants some girls for the night, taking him to Easton LTA to pick up a couple of Korean escorts and drop all three of them off at The Celtica Hotel in Star Junction.

It is assumed the Prince is a grandson of the Queen, which would make Princess Georgina his sister or cousin.

He is a socialite and serial womanizer, who uses his wealth and influence to get with his fellow club goers, even suggesting that he could use Luis' help to pull them some time. 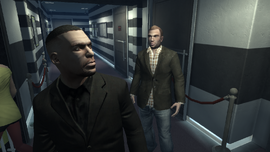 The British Prince at the Maisonette 9. 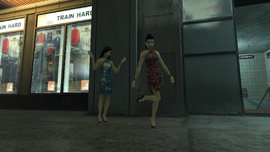 The two Korean escorts that the prince leased.