Standard White - 100%
“You favor light, compact versatile car design. You believe a hot hatch can be just as macho as a lumbering supercar. You describe yourself as having a "big personality". You know who you are. Just buy the damn car and get it over with.”
— Southern San Andreas Super Autos description.

The Grotti Brioso R/A is a compact car featured in Grand Theft Auto Online as part of the Cunning Stunts update.

The car takes a compact 2-door design based on the Fiat 500 Abarth, seen especially in the rear quarter and rear lights, and minor design influences from the Suzuki Swift in terms of frontal shape and grille design. The curved side-rear windows appear to be based on those found on the third generation Nissan Micra, along with the slightly lower roof height when compared to the Fiat 500 Abarth. The front quarter also takes up resemblance of the Mini John Cooper Works WRC, most notably from its grille. The front and rear wheels have extended bolt-on arches in carbon fiber.

The Brioso R/A is painted in a primary colour for most of its bodywork, while the secondary colour is applied to the roof, pillars, and the upper portion of each rear-view mirror. It uses the "Cavalcade" dials and interiors.

While the Brioso R/A is fast and nippy for tackling corners, it is prone to constant spin-outs due to its heavy oversteer as a result of an awkward landing from jumps and has problems recovering from a spin. As such, it is best used for races with a flat and straight terrain, or off-road terrain that does not have too many bumps with it. Furthermore, it has weak durability against harsh collisions as without Armor Upgrades, it can greatly upset the Brioso's overall performance.

The Brioso R/A is powered by the same engine model as the Futo: a twin-cam 4 cylinder engine bearing 4 throttle bodies/carburettors. Said engine is coupled to a 6-speed gearbox in a front-engine, all-wheel-drive layout. 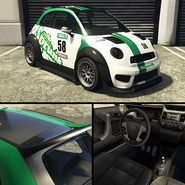 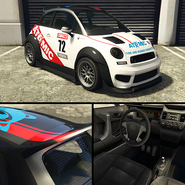 The Brioso R/A on the Rockstar Games Social Club.