Standard White - 100%
“Grotti's designers always knew they were missing something vital. Sure their compacts ticked all the boxes – knees by your chin, elbows out the window – but day after day they would return to the drawing board certain there was one trick they'd yet to try. And then, one beautiful genius whispered "smaller". That's how the 300 was born.”

The Grotti Brioso 300 is a compact car featured in Grand Theft Auto Online as part The Cayo Perico Heist update.

The Brioso 300 is primarily based on the original Fiat 500, seen in the compact design, headlamps and rear-mounted engine. Several of its modifications allude to options available for the 500 across its production run, as well as variants. One particular option is to leave the bonnet propped half-open, a feature of necessity for variants of 500-based Abarth models to accommodate a larger engine. Like its real life counterpart, the Brioso 300 does not have reverse lights.

The front of the car is relatively small, featuring a chrome flat bumper with a small defense bar mounted in front of it, as well as a license plate on the centre. The outer edges of the car bears a set of small oval-shaped intakes just above the bumper resembling those from the NSU Prinz and large circular headlamps on the upper areas, all of them with chrome trim around. The centre of the car has a distinctive shape on the middle and features the Grotti emblem with a chrome detail around it. The front area features a small elevated trunk with a chrome detail passing through the centre of it, and opens to reveal a small luggage compartment.

On the sides, small side amber lights can be seen on the front quarters of the vehicle, while the fenders have a flared profile. Chrome details can be seen on the skirting area, the doors and the rear sides, along with traditional door handles and square-shaped mirror wings. The greenhouse area makes use of plastic fittings around the windscreen, rear-quarter windows and rear window, as well as chrome trims around the door windows, chrome inner door pillars and chrome details that follow the general shape of the cabin, passing above the side windows. The roof area distinctively features a soft top above the seats.

The rear of the car features a small engine compartment with small vented details on the upper corners and a large one above the license plate, along with vertical vents above the same compartment door. The outer edges of the car feature single rectangular red tail lamps with chrome details around. The lower area features a chrome flat bumper with defense bars on the outer sides and rear quarters. A small exhaust tube can be seen on the passenger side, just below the bumper.

The interior of the car uses the same "Peyote" dials, but the small circular gauges are located on the centre of the dashboard. Two aircon units can be also seen on the edges of the dash, along with small switches below the gauges and what seems to be an open compartment below the dash.

The primary colour of the car is applied on the bodywork, the engine and most of the interior, while the secondary colour is applied on the cabin area, lower interior section, sun visors, door cards and the inner portions of the seats. It uses a unique set of wheels consisting of a large dish with small spokes around, a layout similar to vehicles like the Glendale and the Cheburek. 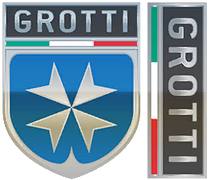 The Brioso 300 is overall poor in terms of performance, with underwhelming top speed and having a tendency to oversteer when turning hard, even with its upgraded suspension. It has poor resistance against collisions, and because its fuel tank is located in the front, repeated collisions will eventually cause its fuel tank to rupture and leak before it stops working. In addition to having poor resistance to gunfire, as its engine is located on the rear, the Brioso 300 is a very risky vehicle for a gunfight, especially if its engine block is exposed. Its acceleration, even when fully upgraded, is relatively sluggish, making it difficult to keep up with other Compact vehicles that have much better acceleration.

The vehicle appears to be powered by a two-cylinder engine fitted with twin carburetors/throttle bodies, which is coupled to a 4-speed gearbox in a rear engine, rear wheel drive layout. It can be upgraded with a single-cam V6 with double-barrel carburetors on it, though it is only a cosmetic upgrade. It shares the same engine sound from cars like the Blista Kanjo.

Installing any "Hood" modification will increase its traction slightly, in the same way as a spoiler. Unfortunately, it still has bouts of oversteer even with the slight increase in traction. 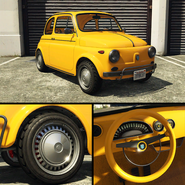 The Brioso 300 in the cinematic preview on GTA Online Rockstar Games Social Club.