Bringing The House Down

Plant explosives in the old subway tunnels in order to destroy Fort Staunton.

In-game time
“If the Panlantic deal is to come to fruition we're going to need to, um... how can I put this delicately... 'clear' a small section of land in Fort Staunton.”
— Donald Love

Bringing the House Down is the final mission in Grand Theft Auto: Liberty City Stories given to protagonist Toni Cipriani by explosives expert 8-Ball from his explosives shop in Pike Creek, Shoreside Vale, Liberty City.

“Toni, we're one little job away from being fabulously rich. We've scoured plans of Fort Staunton. Its weakest points are along the old subway that runs underneath the area.”
— Donald Love

Toni returns to 8-Ball who has all the explosives ready. Donald Love phones 8-Ball and informs Toni that the weakest points under Fort Staunton is the new Porter Tunnel development and the old subway tunnels. Toni leaves, carefully driving the van full of explosives to Fort Staunton. On the way, he is attacked by Forelli Family goons but manages to escape. He then enters the Porter Tunnel and drives to various parts of the Tunnel and subway tunnels, planting the explosives. Toni then leaves the tunnels, killing any construction workers who are witnesses. He escapes in a vehicle, just as the explosives detonate, destroying Fort Staunton.

The reward for completing the mission is $5,000 and the "Love on the Run" mission is unlocked.

8-Ball explains to Toni to drive carefully because the truck is loaded with explosives that can go off at any moment.

8-Ball receives a phone call from Donald Love and he requests Toni.

Donald has a plan to gain wealth.

Toni is of course worried about the Forellis.

Get in the van.

Head for one of the Porter Road Tunnel entrances.

There are 3 possible entrances to Porter Tunnel.

All of a sudden Forelli members appear.

Toni follows the tunnel as usual with traffic.

Toni turns to a construction area.

The road is full of obstacles that you need to avoid.

Toni is moving to the next planting site.

Toni plants the second bomb and gets caught by a witness.

Escape through the subway entrance!

The Forellis have blocked the way back. Find another exit.

Toni finds another way out.

Use a vehicle to smash through the gates and reach the exit.

The bombs start going off with Toni managing to escape.

The entrance to Fort Staunton Train Station is exploding.

The explosion is so intense that cars fly over to Liberty Campus, causing major harm to people there.

Bo-Bella boutique exploding along with the rest of Fort Staunton. 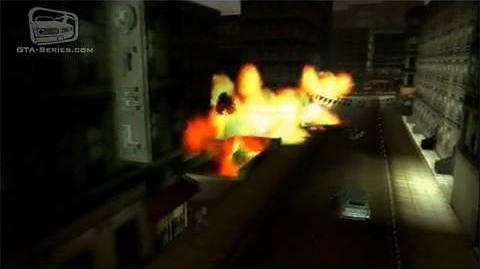 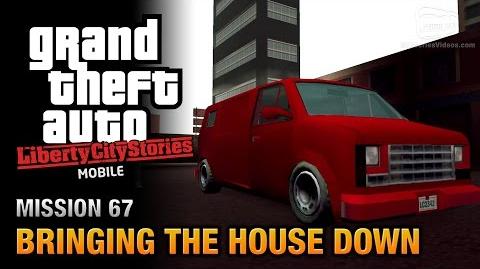