A Brickade in The Ballad of Gay Tony.

Standard White - 100%
“There comes a time in everyone's life when you and your extended family needs to freight over 10 tons of delicate merchandise through the heart of a civil war. And when that time comes, there's only one choice. And for all the other times, it's great in traffic.”
— Warstock Cache & Carry description.

The Brickade is an armored truck that appears in Grand Theft Auto Online as part of the Further Adventures in Finance and Felony update. It was also supposed to appear in The Ballad of Gay Tony as a compact armored van, but was not added. The Brickade is manufactured by HVY in The Ballad of Gay Tony and MTL in Grand Theft Auto Online.

The Brickade is depicted as a large, stumpy and generic armored bus-like van based on Prosegur's armored vans with additional reinforced construction resembling those on an RG-12 APC, produced by Land Systems OMC.

The Brickade is somewhat similar to the Securicar, but adopts a cab-over design, a beige bodywork and much smaller wheels. In addition to a thick body shell, the Brickade is also equipped with plating that protects the front radiator grill, as well as steel mesh grating covering the front windscreen and wheel wells. The Brickade is implied to be associated with the LCPD or the NOOSE, as it has a police radio and the ability to pass through tollbooths without paying. However, unlike most police vehicles, the Brickade can use a Pay 'n' Spray, similar to the FBI vehicles in the 3D Universe.

Despite it having two doors in the front and two doors in the back, like the Securicar and their variants, it can only fit two people in it, as the back doors are not programmed to open and fit people in the back like these vans can. However, they will only open upon heavy impact. This is because the Brickade is an unfinished project, which will make it noticeable for missing a few details.

When exploded after suffering heavy damage, the actual bodywork of the Brickade is only slightly charred (although generic parts, such as its wheels, lights and interior are severely burnt), unlike other vehicles in GTA IV.

The vehicle is set to spawn in a beige colour. However, the bodywork is actually covered by a texture and the actual colour is applied on the inner door trims.

The truck appears with a redesign in Grand Theft Auto Online, where it has a large 6-wheeled design with a utility rear. It is primarily based on the MAN TGS 26.480 6x6 Expedition Truck, as well as taking influences from the MIDS 8815.

The Brickade still inherits the square shape but assumes a more detailed design, featuring several accessories around it. On the front, the vehicle features a large bullbar fitted with a winch, protecting the cabin's front and the large radiator (which is more visible when the bumper is detached). Its headlights are integrated within the outer edges of the bumper, employing a set of main lights of different shapes and LED-like turn signals. Around the cabin, there is a black sunshade covering the upper side of the windscreen and an overhang of high-beam lights, directly mounted over a set of protective frames on the upper section, covering a portion of the windscreen and the roof. A sunroof and a set of dual trumpet horns can be found on the roof.

On the rear module, the sides are mostly composed of small compartments on the lower side and numerous windows on the upper side, as well as a door and the fuel tank on the right side. Various handles and stands can be seen built from the bodywork, which allows players to hang on to the truck. Two larger compartments can also be found on the rear part of the module. The module itself is also protected by protective frames covering the front, rear and roof, with four mounted lamps facing either side of the truck, that are turned on in conjunction with the yellow marker lights.

The rear end of the module is predominated by a large load carrier which seems to retract from the vehicle from two steel bars, along with a bullbar mounted on the lower rear that prevents damage to the rear of the chassis. Rectangle tail lights can be seen on either side of the vehicle, as well as a rear window partially covered by the rear load carrier. The roof features various small hatches and what appears to be solar panels.

The Brickade is painted in a primary colour for the upper side, rear bullbar and interior stitching, as well as with a secondary colour for the lower side, front wheel arches, and front bullbar. The protective frames around the truck, the sunshade above the windscreen, and the stands on the lower sides have a permanent black colour. It also employs heavy-duty wheels with rugged off-road tyres.

Given its armored construction and subsequently heavy weight, the Brickade's performance is as expected for a vehicle of its class.

The Brickade suffers from poor speed on average due to poor acceleration, but can reach slightly above average top speeds after uninterrupted and prolonged acceleration. Its steering also varies; due to its shorter wheelbase, strong torque and rear wheel drive, the van can execute tight turns in low speeds, but this trait is hampered, as the vehicle travels in higher speeds and increases its inertia. Similarly, its brakes are reliable when the vehicle travels slower, but requires a moderately longer stopping distance when braking in higher speed (although they still fare better than those of the Ripley). Regardless, the Brickade's heavy weight allows it to push smaller and lighter vehicles out of the way with ease.

The Brickade is also considerably hardened to handle selected forms of damage to an extent, to the same degree as the Securicar, Police Stockade and Enforcer. The vehicle can absorb large amounts of gunfire, but will eventually succumb to engine damage, especially when it is shot at the front, where the engine is. The Brickade can also survive six direct hits from the Automatic Shotgun's explosive rounds (three times the amount of a regular car, at any part of the vehicle) before its gas tank ignites and results in the vehicle exploding.

The Brickade is the most durable front-engine vehicle in the HD Universe, even more durable than the rear-engine APC.

The vehicle is by far one of the fastest large-sized trucks in the game, having very quick acceleration and a high top speed. Its durability is one of the best for a truck, taking a large amount of ramming and gunfire. It also has great handling, something unique compared to other trucks in the game. The Brickade is also capable of ramming smaller vehicles, without losing too much speed. Similar to vehicles like the Granger or the Roosevelt, the Brickade allows passengers to hang on the sides, allowing them to use assault rifles and Light Machine Guns, however, like any of these vehicles, they are very exposed to crashes and gunfire. Because of the bulletproof windows, the front occupants are partially safe until these become shattered by excessive gunfire, similar to the Rumpo Custom, the XLS (Armored) and the armored vehicles featured in the Executives and Other Criminals update.

The engine sounds the same as regular trucks, being a medium/high revving engine, cab-over configuration. The six-wheel drive layout (25%-75%, front to rear torque distribution) gives it excellent traction, paired with its rugged heavy duty tyres. The stated 24 valve system would correctly relate to the 6-cylinder engine, assuming the truck takes the standard 4-valves per cylinder configuration.

Front view of the Brickade.

Front view with a Titan closely behind. 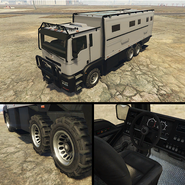 The Brickade on Warstock Cache & Carry.

The Brickade on the updated Rockstar Games Social Club.

The Brickade in the cinematic preview on Rockstar Games Social Club.

Brickade documents found in Warehouses in GTA Online. Note the cabin antennas, which are absent in the final model. 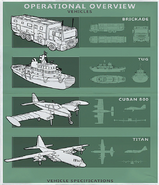