GTA Wiki
Register
Don't have an account?
Sign In
Advertisement
in: LCPDDB, Characters, Characters in The Lost and Damned,
and 8 more
English

Brian Jeremy is a main character and the tertiary antagonist in The Lost and Damned. He was the Club Secretary of The Lost MC until he betrayed them and created his own faction.

Brian Jeremy was a 39-year old acting-Lieutenant of The Lost MC and was known to be extremely loyal to the gang's incarcerated leader, Billy Grey. He is apparently displeased with the direction Johnny Klebitz is taking the gang in due to the truce with The Angels of Death. Brian constantly argues with Klebitz over Grey, and always defends Grey, even if he is making the wrong decisions. Johnny also constantly insults him, especially his combat skills among other things.

Brian (along with Johnny, Terry Thorpe, Clay Simons, Jason Michaels and Jim Fitzgerald) were the 6 bikers who visited Grey to pick him up from jail in the game's intro. He later appeared assisting the game in the missions Angels in America and It's War; in those cutscenes, he was seen quarreling with Johnny. Brian also backed up Billy and the gang during Billy's mass raid on the Angels of Death Clubhouse, and likely agreed with his decision to steal and keep the heroin, despite Johnny's claim that this would provoke too massive a scale of a war between the Heroin's original owners (the Triads) and the AOD, Brian then (off-screen) physically took possession of the heroin, and then gave it to Johnny during an unsuccessful drug deal; however, despite having backup, the deal failed.

In the mission Chinese Takeout, Billy Grey was seen organizing a betrayal plot against Klebitz and Fitzgerald. Billy and Brian would stand outside the Triads' building and allow Johnny and Jim to walk into the building, and let the Triads take their Heroin in exchange for Johnny and Jim's murders. However, in what may have been a police setup by the Triads, the police arrested Billy. Brian's attitude and words after his arrest implicate that he almost certainly is completely unaware that this was a setup by Billy, thus leaving him convinced that Johnny betrayed him.

After disappearing, Brian created a faction off The Lost MC (the Jeremy Biker Gang). When he and his gang were confronted by Johnny's faction in End of Chapter, Brian revealed his traitorous nature—convinced that Billy's arrest was Johnny's fault, he sent his faction to (unsuccessfully) attack Johnny, Jim, Terry and Clay. Brian escaped, but considering the very large amount of hitmen who attacked, it appears as if Brian convinced many members of The Lost (in a brief time span) to join his side.

Ray Boccino, who The Lost had met before, was allied with Jeremy; but not desiring the civil feud between the factions for his business with The Lost, Boccino betrayed Jeremy in Bad Standing and exposed his location to Johnny, who went and confronted Brian at his house. Johnny can either kill him here, or spare him and then later kill him after he betrayed him a second time in a random encounter. If the player chooses to kill him during the Bad Standing via execution, Brian will start pleading for his life, but Johnny will angrily tell him to accept his fate and shoot him in the chest.

After Brian's death, his memorial picture is cracked due to his betrayal towards Johnny and the rest of the Lost members.

Even before the betrayal, Johnny has a clear disliking of Brian, which causes the disliking to turn into an open hostility. This can be seen as Johnny and Brian often argue during Billy's missions, and if the mission Buyer's Market is failed with Brian's death, Johnny will call Billy and say that he has good and bad news, mentioning the bad news is that they lost a brother and the good news is it was Brian. It is possible that they were close friends at some point, at least enough to ride to Los Santos together with Terry in 2004.

NOTES
- Senior member of the Alderney Chapter of the Lost OMG.


- Believed to be fiercely loyal to the incarcerated head, Billy Grey.


- Rumored to be unhappy with the Lost's uneasy truce with the Angels of Death OMG.

Brian Jeremy is, at first glance, an enthusiastic and energetic member of the Lost MC, given that early missions can often include him chanting the club name, as well as insults directed towards the Angels of Death. In particular, he is very loyal to Billy Grey despite Billy's verbal abuse towards him, and seems to dislike Johnny to the extent of jeering him while riding together. Both Brian and Billy Grey were arrested for murder in 1989, hinting that they may have been working together to commit the murder. This could explain Brian's fierce loyalty to Billy. Brian even goes as far to blame Johnny entirely and accusing him of betrayal for Billy's arrest following what was an obvious failed ambush on Johnny and Jim.

Although it is inferred early on by other members' mocking of him, as the storyline goes on, Brian's enthusiasm proves to be nothing but a facade as he is revealed to be simply an immature coward. This cowardice does not even spare Billy, given he tries blaming Billy to save his life. Despite this pathetic cowardice, it can be inferred that Brian is charismatic, given he manages to get a large portion of the Lost MC to join his splinter faction in a short amount of time.

Brian, like Billy, holds racist views, as he uses a derogatory term when describing the heroin deal with the Triads. He also holds anti-Semitic views, as proven when he specifically points out Johnny's Jewish heritage when insulting him.

Brian's jacket, like any outlaw motorcycle club member's, has a lot of patches in it. Here they are, and what they mean:

If the player looks closely in the introduction, they can see that Brian is missing all of his patches except his B.J. patch. This is probably a minor mistake due to the fact that he removed those patches after the mission End of Chapter.

Brian's introduction in Clean and Serene.

In-game Brian without his glasses.

Brian sitting at the bar in This Shit's Cursed. (Subtitles of Billy Grey talking). 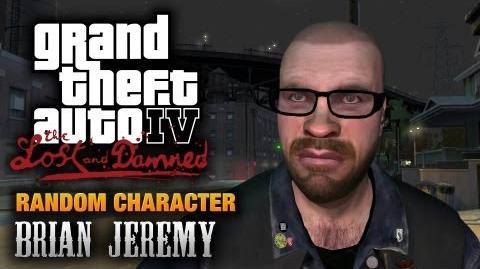