Breaking The Bank At Caligula's

Up, Up and Away!
Saint Mark's Bistro

Breaking the Bank at Caligula's is the final heist mission in Grand Theft Auto: San Andreas given to protagonist Carl Johnson by San Fierro Triads leader Wu Zi Mu from The Four Dragons Casino, located along The Strip in Las Venturas, San Andreas.

Carl arrives at The Four Dragons Casino, dressed as a Caligula's employee, to meet Woozie and the crew in preperation for the heist. The team get into a Securicar and head towards Caligula's Palace, whilst Carl makes his own way there. On the way, Zero asks Carl if he can hear him on his earpiece, with Carl replying that he can.

Carl enters the casino and uses Millie's swipe card to gain access to the lower floors of the casino. Carl heads into the generator room, where he throws a Tear Gas canister into an air vent, which lands outside the safe and knocks out two security guards.

Zero activates the charges Carl placed at the Sherman Dam, which blacks out the casino. Carl uses night vision goggles and makes his way to the service bay. He uses a Forklift to open the garage door and allow Woozie and the team to enter. The team head towards the safe whilst fighting their way through the security guards. Once at the safe, Zero announces that someone (whilst continually cursing Berkley) is trying to restore the power using the backup generators. Carl heads back to the generator room and blows up the backup generators.

The Triads open the safe using satchel charges and enter to steal the money. Whilst the Triads are in the safe, Carl protects them from incoming Mafioso. Once the team have collected the money, Carl leads them back to the Securicar whilst fighting the security guards. During the firefight, the power is restored and Zero once again curses Berkley. When the team reach the service bay, they load the money into the Securicar and leave the casino escorted by two members using police bikes.

Carl, acting as the decoy, must make his way to the casino roof. He does so, fighting off more Mafioso, and enters the roof to find the casino surrounded by police. Carl collects a Parachute and jumps off the roof. Once he lands, he escapes from the police and meets the team at the Verdant Meadows airstrip. At the airstrip, Zero admits to Carl that he informed Berkley about the heist, with Carl retaliating by punching Zero in the face. Woozie orders Carl to "calm down" before asking Carl to drive him back to the Four Dragons Casino. Following the mission, an angry Salvatore Leone phones Carl and makes various threats to Carl and his family. Carl taunts Salvatore about the heist and hangs up.

If Carl fails the parachute jump to the helicopter, the mission is not a failure; instead, Carl simply needs to steal a vehicle and drive it to Verdant Meadows, while being pursued by the enemy helicopters. If the player has a wanted level of three-stars or fewer, they can escape the police by outrunning them.

The rewards for this mission are $100,000 and an increase in respect. The Croupier Outfit Carl wears becomes available from his wardrobe, although it serves no purpose after this mission.

CJ: "Salvatore! Nice to hear from you, too!"

CJ: "Well, it's been nice to talking to ya, but I got some money needs spending on some expensive trash so you'll excuse me."

Carl Johnson using Millie Perkins' key card to access the employees only area of the casino.

Guards at the safe passing out after Carl Johnson threw tear gas down a ventilation shaft.

Carl Johnson using a forklift to raise the shutters, after Zero detonated explosives at the Sherman Dam.

Carl Johnson and team inside the casino.

Carl Johnson on the roof of Caligula's Palace, attempting to escape from the Mafia.

Carl Johnson and Zero at the Verdant Meadows air strip.
Add a photo to this gallery 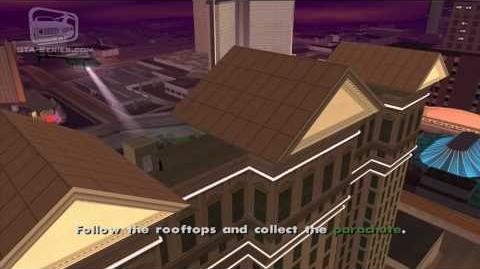 Retrieved from "https://gta.fandom.com/wiki/Breaking_the_Bank_at_Caligula%27s?oldid=853492"
Community content is available under CC-BY-SA unless otherwise noted.