• ­Go to the Wastelander.

• ­Get in the Wastelander.

• ­Deliver the Wastelander to the drop off.

• ­Help deliver the Wastelander to the drop off.

Out of lives.
Wastelander destroyed.

Reaching Rank 1.
Stealing and storing 8 vehicles in a vehicle warehouse.

"Source a modified classic car restoration project for SecuroServ by taking the vehicle transport truck it's loaded onto. It's a rare and technologically advanced vehicle so expect armed resistance."
―Description

Breakdown Recovery is a Special Vehicle Work mission in Grand Theft Auto Online as part of the GTA Online: Import/Export update. It is the "Wastelander Mission".

The Assistant will inform the player that SecuroServ wants to source an old wrecked vehicle that is in possession of the Vagos criminal network, located in the Sandy Shores Airfield hangar being guarded by several Vagos members. Said vehicle is an old modified Ruiner loaded onto the back of a Wastelander, so they need to extract the truck from there.

Once the team takes out the enemies, one have to take the truck and the other must provide defense to it. There is a Buzzard Attack Chopper in the heliport, which is the perfect choice for aerial support. On the way to the drop-off point, more Vagos members will try to take out the player on the truck, so it is advisable to stay off the road in order to avoid facing them. If it is done correctly, they should not have trouble to reach to the destination, which is the RON filling station located at the Route 68, near Lago Zancudo. 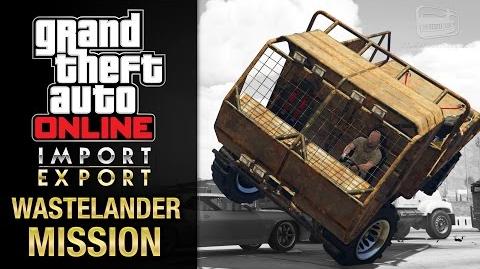 Retrieved from "https://gta.fandom.com/wiki/Breakdown_Recovery?oldid=1061497"
Community content is available under CC-BY-SA unless otherwise noted.