Brawn Of The Dead

Victor Vance taunting Jerry Martinez on the phone whilst Lance Vance looks on.

• ­The Gore meter will slowly empty over time, but will empty faster if any of the zombies get too close.

• ­In this scene the zombies are invading the record store!

• ­Don't let any of the zombies get into the store.

• ­Take Lance back to his apartment.

From Zero To Hero

In-game time
“Shit! It's gone! The coke's gone! And mom's stuff is gone too! That damn bitch! I can't believe she took our coke!”

Brawn of the Dead is a mission in Grand Theft Auto: Vice City Stories given to protagonist Victor Vance by his brother Lance Vance from his apartment in Ocean Beach, Vice City.

Victor arrives at Lance's apartment. Just as Lance enters with a new suit. Vic calls Jerry Martinez and thanks him for the drug shipment he stole from him but Martinez tells him the coke belonged to the Mendez brothers and that they are going to kill anyone involved in it including Martinez himself. Vic angrily starts shouting at Lance just as Lance finds out that he's got a buyer. The two drive over to the North Point Mall in Vice Point and Spitz (the buyer) needs a stuntman to finish a stunt movie for him inside the mall. Vic decides to do the stunts while Spitz and Lance do their drug trade. He first kills all the zombies with a shotgun and then in the second scene the zombies are invading a recording store where Vic kills them all with a katana. Once finished Vic and Lance both drive over to Lance's apartment in Ocean Beach to pickup the rest of the drugs but upon arriving they find out that their mother has taken all the drugs.

Spitz: If you wanna film 'snow-white', see Reni up at the Film Studios...

Lance Vance: You better get over here pronto...

Upon completing this mission the player is rewarded $850 and the missions Blitzkrieg and Accidents Will Happen are unlocked. The pastel suit is also unlocked and becomes available in the wardrobes of all safehouses. 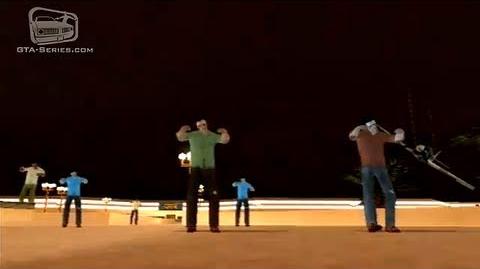 Polski
Community content is available under CC-BY-SA unless otherwise noted.