View source
watch 02:52
Roblox: DeepWoken - The Loop
Do you like this video?
Play Sound
Not to be confused with the Growler.

20
“You want to do a cross-desert rally raid, but none of the 4x4s on offer will make you look like enough of a rich douchebag? Well, we've got the car for you. Part racer, part off-roader, all asshole with a large dollop of suspension. You won't know if you're crushing protected wilderness or the bones of the underpriviledged under your deep-tread, titanium, reinforced tires. This is the natural order of things.”

The vehicle is heavily based on the Local Motors Rally Fighter, seen in the overall shape and purpose, albeit featuring dual headlights and smaller grille.

The vehicle is depicted as a buggy-like vehicle with off-road modifications and attachments. The lower area of the front is predominated by the sump guard protecting the front axle, while the upper area is occupied by the front fascia, composed of two small lower intakes, the small grille with an horizontal separation on the center and the inset sections on the edges housing dual circular headlights. The hood has two impressed areas, with the second one leading to a wide intake. A small Coil emblem can be seen on the front, while silver "BRAWLER" lettering can be seen on the horizontal grille separation. The engine also has "BRAWL" badging on its cover.

The sides of the car denote its tall profile and curved shape, having two impressed areas on the front fenders, with the upper area being partially covered by a black detail with "COIL" badges embossed on them. The doors have a curved profile that aligns with the rear section, which feature black handles and large body-colored mirror shells. The cabin area is relatively tall and features plastic details around the windows and on the roof.

The rear overhang of the car is relatively short in comparison to most vehicles, while the rear end features an inset area for the license plate, silver "COIL" lettering on the passenger side and the corresponding tail lights. The rear bumper is bulky and features a mesh vent on the lower side, along with silver lettering displaying its name.

The interior of the car is shared with the Sultan and the Kuruma, using the same blue dials and details. However, it bears the Coil emblem on the horn cap.

The primary color of the car is applied on the bodywork, roof panel, rear trunk, rear intake surroundings and interior stitching, while the secondary one is applied on the front area, bottom sides, cabin pillars, rear fenders and rear bumper. It uses a set of eight-spoke rims with bolt details around, wrapped in high-profile tires with knobby treads. 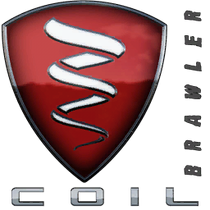 The Brawler is stated to be powered by a 5 litre V8 engine capable of pushing 400HP. However, its engine is modeled as a twin-cam Inline-6, coupled to a 5-speed gearbox in a front engine, all-wheel drive layout. It has a rather unusual distribution of 9% of the power going to the front wheels. This is not enough power to spin the wheels should the Brawler be flipped, but is enough to keep the front wheels spinning. It uses a unique engine sound, which is mid-revving and rather noisy, though smoother than the ones from the Injection. 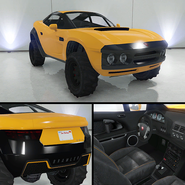