"You want to do a cross-desert rally raid, but none of the 4x4s on offer will make you look like enough of a rich douchebag? Well, we've got the car for you. Part racer, part off-roader, all asshole with a large dollop of suspension. You won't know if you're crushing protected wilderness or the bones of the underpriviledged under your deep-tread, titanium, reinforced tires. This is the natural order of things."
―Legendary Motorsport description.

The vehicle is heavily based on the Local Motors Rally Fighter. It has a buggy-like design with off-road modifications and attachments.

The vehicle is designed as a 2-door vehicle with four circular headlamps. Both the front and the rear has "Brawler" markings, as well as "Coil" and the manufacturer's emblem on the rear and front, respectively. By default, it has a hood scoop and side vents, with "Coil" embossed on the sides, and the "Brawl" marking can be seen on the engine bay. The car itself is of medium size and has large high profile off-road wheels.

Its paint job scheme is quite unique, as it has the secondary color on the front end, rear fenders and rear bumper. On the roof, two stripes following the A and B-pillars go across the vehicle in the respective secondary color. 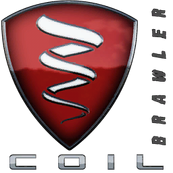 The Brawler is stated to be powered by a 5 litre V8 engine capable of pushing 400HP. However, its engine is modeled as a Double Overhead Camshaft Inline-6, coupled to a 5-speed gearbox in a front engine, all-wheel drive layout.

Retrieved from "https://gta.fandom.com/wiki/Brawler?oldid=1266073"
Community content is available under CC-BY-SA unless otherwise noted.