Braddock Pass is a mountain pass located in the State of San Andreas feautered in Grand Theft Auto V and Grand Theft Auto Online. It connects the communities of Grapeseed and Paleto Bay via Route 13 although only the northbound lane runs through the actual pass, southbound traffic runs parallel through the nearby Braddock Tunnel. It is nestled between Mount Gordo and Mount Chiliad. A rail line also runs through it, bringing freight from factories in Paleto Bay to the city of Los Santos.The pit stop nearby contains a gas station along with a Limited LTD Service convenience store. There is also the Braddock Farm in the southern end, where illegal substances are being grown. 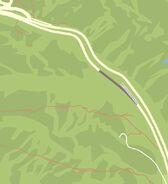 Map of Braddock Pass.
Add a photo to this gallery

Braddock Pass appears to be based on the Gaviota State Park in California.

Retrieved from "https://gta.fandom.com/wiki/Braddock_Pass?oldid=1269410"
Community content is available under CC-BY-SA unless otherwise noted.