Braddock Farm is a small farm located at the base of Mount Chiliad in Braddock Pass, Blaine County.

The farm consists of a small house, a wooden shack, and a windpump. It serves as a lumberyard, and a plant nursery. Cows can be found here eating grass, along with inhabitants walking around checking on lumber with clipboards, talking on the phone, and other tasks.

The Braddock Farm appears to be a marijuana growing and distributing area, as there are cannabis plants seen growing in plots under white canopies. In story mode it is protected by Marabunta Grande, but in Grand Theft Auto Online it is owned by the The Lost MC.

When approaching the area for the first time as Trevor, the player is given the option of raiding the farm and stealing the profits after killing several Marabunta Grande guards, which will earn around $44,000.

Although the game prompts the player to return in a week or so to steal any future earnings, this Random Event now no longer repeats following a software patch.

View of the house, along with the Confederate Flag and resident.

One of the farm's residents with a pen and clipboard.

Weed in the enhanced version.

The briefcase of takings at the farm 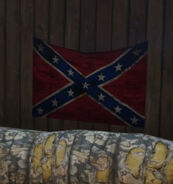 The confederate battle flag, prior to removal.

The sign added in the Doomsday Update.
Add a photo to this gallery

Retrieved from "https://gta.fandom.com/wiki/Braddock_Farm?oldid=1183411"
Community content is available under CC-BY-SA unless otherwise noted.