Brad is voiced by Ryan Woodle, who also voiced Chad in The Lost and Damned.

Lester Crest: "A long, long time ago in a faraway place, there were three guys. Michael, Trevor, and Lester."
Trevor Philips: "And Brad."
Lester Crest: "Yeah, sure, Brad was there sometimes as well."
—Lester and Trevor during Surveying the Score

Brad did not commit any serious crimes until he met with Trevor Philips and became a member of a heist crew, consisting of Trevor, Michael Townley and Lester Crest. From then on, they would rob banks and make a fortune, all while evading law enforcement. Despite their fruitful partnership, Brad was disliked by both Michael and Lester, who distrusted him. Trevor, on the other hand, had a closer connection with Brad than he did with Michael.

“Where the fuck's the chopper..? I'm gonna check around back—”
— Brad seconds before he is shot

It was in 2004 when Brad participated in an ill-fated heist in Ludendorff, North Yankton, along with Michael, Trevor and an unnamed local getaway driver. The heist was a failure, with Trevor killing a security guard, unexpected police "attention" resulting in the death of their getaway driver, and Brad and Michael being shot during the escape by Dave Norton, an FIB agent. Only Trevor managed to escape from the authorities. Officially, Brad was imprisoned with a stiff sentence, while Michael was reported to have died from gunshot wounds.[1] However, in reality, Brad succumbed to his wounds and was buried in the grave marked "Michael Townley", with Michael changing his and his family's surname to "De Santa" and moved west to Los Santos with his family under a deal with the FIB.[2]

Over the next nine years, "Brad" maintained an infrequent correspondence with Trevor by writing letters and sending emails occasionally. It served as his only communication with the outside world, as he claimed to have been denied visitor privileges.[3] By the time Trevor reunites with Michael and Lester, "Brad" seems relatively at peace with his situation and encourages Trevor to turn himself in, or at the very least give up his criminal life and live peacefully.[4] In reality, these messages were written by Dave Norton, the FIB agent who killed him, to allow him to both monitor Trevor, and to prevent him from discovering the truth behind the cash depot heist.[5]

“I'm going to see an old friend, alright? If you're where I think you are, buddy...”
— Trevor in Bury the Hatchet planning to investigate Michael's grave and figure out who was buried there instead

Trevor eventually realizes the truth, however. Brad never survived the botched cash depot heist and was buried in the place of the legally dead Michael Townley. Michael, who knew the truth all along, tries to prevent Trevor from finding out, but fails to stop him. Over Michael's protests, Trevor flies out to North Yankton to confirm his suspicions, and exhumes Brad's corpse from "Michael's" grave.[6]

Following this discovery, Michael and Trevor refuse to speak to each other, a hostility which lasts until the end of the storyline.[6][7][8][9][10][11][12][13] At the end of the storyline, Dave emails Trevor and explains that he was the one who sent the e-mails and letters using Brad's identity.[14] When hanging out, Trevor forgives Michael and both mutually agree that Brad was a "dick".[15]

Brad had little screen time during the game to fully display his personality. What is known of him are second-hand descriptions, mostly by Trevor, who is an unreliable narrator.

For much of the game it is implied that Trevor and Brad had a close relationship. Trevor attempted to write to Brad while he was supposedly in prison,[5] and several times during the game talked about missing Brad.[16][17] When Trevor first begins to think that he was misled on Brad's death, he loses it and flies straight to North Yankton to verify.[6] On the other hand, while hanging out with Franklin, Trevor says that he thought Brad was a "dick", and would have probably killed him at some point anyway.[18] Michael never spoke too much about Brad, but Trevor claims that the two of them never liked each other and that at one point Brad planned to cut ties with Michael to work solely with Trevor.[19] Lester Crest described Brad as the "shit" part of the team, because he was "lazy, forgetful, mean and stupid."[20] Brad appears to lack empathy, as he laughs and brags about smashing a woman's face into a glass window. Michael berates him for doing so, sarcastically calling him a "stallion".[21] 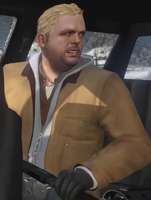 Brad during the getaway. 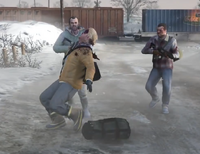 Brad after being shot.