View source
watch 02:52
Roblox: DeepWoken - The Loop
Do you like this video?
Play Sound
Not to be confused with GTA Online Bounties, Lester Kill Target or GTA V Bail Bond missions.

In-game time
“Hello stranger! I interest you in some bounty hunting? We're in no short supply of those that need bringing into the bosom of the law. Just need to find them or kill them if needs be?”

Bounty Targets [2] are a series of missions in the enhanced version of Grand Theft Auto Online added as part of After Hours update. It served as a teaser for Red Dead Redemption 2.

An unsolicited text message is sent to the player from Maude Eccles, offering work as a bounty hunter.

Maude will contact the player with an email with a mugshot of the target. A GPS marker with an approximate last known location will be marked on the player's map. The player must search the location within the marked area. As the player gets close to the target, a metallic wind chime sound effect will ring, similar to the Treasure Hunt.

The target area could be exited and re-entered if the target has not been engaged. If the player exits Online Mode or closes the game while a bounty mission is not finished, then a new bounty target will be assigned when online free mode is started again, but the overall progress will be kept.

There are five bounties to collect who will be selected randomly from a list of 20 possible NPCs.

The five randomly selected bounties can be located in any one of a number of possible locations. Note: the target may not be in the same location within the target area every time, the images below are intended as examples only. There are more areas including La Fuente Blanca and Kortz Center added in later updates. Gang attack missions that involve nearby zones may also trigger.

Maude's emails and text messages will be identical through each of the five targets irrespective of which character is selected (i.e. the 20 possible characters do not have unique introductions).

A bounty target can be taken alive by melee attack on the target until they surrender. Although certain low-damage per shot firearms like a Pistol will also cause the target to surrender once they are injured, provided the player does not aim for a headshot. Some targets may become aggressive when the player approaches and fight back, either bare-handed or with a melee weapon, such as a Baseball Bat, Bottle or Knife. Some melee weapons will one-shot kill the target, while others can safely be used to subdue the bounty quickly. e.g.

Once they surrender, they will then follow the player into a vehicle to be returned to Maude at her trailer just to the east of Beam Me Up in the Grand Senora Desert. If the player dies while transporting a bounty, the progress will roll back to the previous bounty and a new target will be given. If the target dies, then the bounty will progress to the next level as if the player killed the target. Unlike Trevor's deliveries, Maude will not appear physically at her trailer when the player delivers a live bounty. A small cutscene will play.

A player may choose to kill the target instead of capturing them, but the bounty paid will be halved.

On completion of the 5th bounty, Maude will text message that the last bail jumper had a stash and she will send coordinates for the spot.

The target's secret stash has been revealed. Go there to unlock the chest and collect your reward.

The treasure chest contains the exclusive Stone Hatchet. Claiming the weapon unlocks the Kills Challenge. Unlike the Treasure Hunt where both player characters need to complete the hunt to unlock the Double-Action Revolver for themselves, unlocking the Stone Hatchet on one character will automatically unlock it for the player's second character slot.

There is a 1-minute cool-down before the Rampage ability can be re-activated after it runs out.

The kills can be completed during missions, however the Rampage ability will not be available.

You have received a job offer from Maude Eccles to collect bounties. Open the text message on your phone to view it and accept the job.
Maude will be in touch soon with the details of the first bounty target.
You have received an email from Maude about the first bounty target. Open the email app on your phone to view it.
Search the last known location

to make them stop and surrender.
The bounty target has surrendered and will now follow you. Take them to Maude's trailer

has been revealed. Go there to unlock the chest and collect your reward.
Press

The bells should help.

Although they may decide not to come quietly.

But will surrender with some gentle persuasion.

To be delivered to Maude's trailer.

Or half the reward if they are killed.

After the fifth one is done, an extra reward.

And its rampage effect. 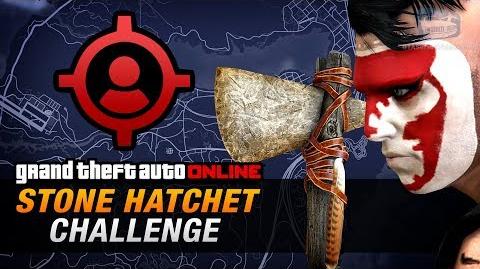