• ­Go to Monique and dance with her.

"You put your cock in my woman's mouth and you think it's cool? "
―Vic, to Luis Lopez.

Boulevard Baby is a mission in The Ballad of Gay Tony given to Luis Lopez by Tony Prince. Ray Bulgarin makes his first appearance of the game in this mission.

Complete the mission in 3:10
Take less than 40% damage
Dance perfectly with Monique.
During the shootout in the club, don't harm any civilians, or Monique.

Arriving at Maisonette 9 for another shift and after flirting and having sex with one of the guests. Luis is introduced to Ray Bulgarin, one of Tony's major debtors who was asked by Luis to keep him and his brother company while he attends to other business. There he proposes Luis cut ties with Tony to work with him during their private meeting as they feel Luis is more competent than Tony ever will be. Tony returns from his conversation with Rocco and considers the prospect of selling the club to the Russian Mob much to Luis' chagrin before being told to drive him somewhere.

After the introduction Luis drives Tony to Bahama Mamas. During the drive, Tony explains that Rocco Pelosi wants Luis to seduce Monique, the girlfriend of Bahama Mamas owner Vic Manzano as part of the deal to pay off the debt owed to Pelosi. The duo arrive at the club before Tony drives off. Luis enters the club and finds Monique on the dance floor. After dancing together, Monique takes Luis to the back office and gives him oral sex, whilst telling Maurice, a bouncer, not to disturb them. However, Vic arrives and walks into the office to find Monique under the table with Luis sitting in his chair. Vic, having lost his temper, attacks Monique and pulls a gun on Luis who realize the whole thing was set up by Rocco to end with either him or Vic getting killed.

When Vic points the gun at Luis, shoot him and pick up his Pistol .44.

Walk out of the office. The club's bouncers will start shooting at Luis, so shoot back. At this point, the clubbers begin to evacuate the club, so be careful not to shoot any. Head for the front door upstairs. Use cover and remember to reload frequently. After murdering the bouncers, Luis leaves the club and calls Tony who was surprised to find Luis angry at him for Rocco's deception.

"Algonquin hot spot Bahama Mama's was the scene of a grizzly shootout earlier."

"Reens of outer borough residents evacuated the club after a violent incident that began in the back office and left several dead. Although police are unsure exactly what happened, amongst those dead was club owner Vic Manzano, a man with alleged links to organized crime. City officials claim this is what happens when nightclubs are allowed to persist and said they will continue moves to shut them all down."

"As if Algonquin residents didn't have enough reasons to resent the hordes of outer borough residents who stream into the center of the city every night, they're now putting them at the risk of being shot. Notorious bridge and tunnel mecca, dance club Bahama Mama's, was recently the site of a violent shootout that left several dead including club owner Vic Manzano."

"Manzano was being investigated by the FIB for his links with organised crime in Liberty City and Las Venturas. He was also thought to be in a spat with members of the Ancellotti Crime Syndicate. Authorities are investigating these leads as possible motivations for the mass shooting. Meanwhile a group of Algonquin residents is lobbying the Civic Citadel to reclose the bridges to keep the bridge and tunnel menace out."

Luis and Kay engaging in sex in the bathroom.

Luis fights his way out of the club.
Add a photo to this gallery 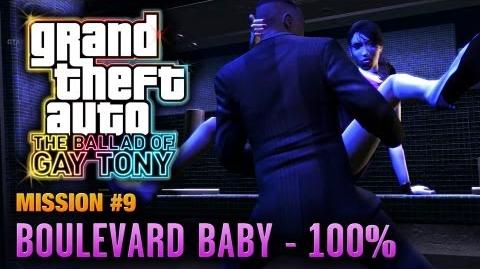 Retrieved from "https://gta.fandom.com/wiki/Boulevard_Baby?oldid=1288168"
Community content is available under CC-BY-SA unless otherwise noted.