GTA Wiki
Register
Don't have an account?
Sign In
Advertisement
in: Features, Features in The Ballad of Gay Tony, Features in GTA V, Booty Call
English

Booty Calls are a feature in The Ballad of Gay Tony and Grand Theft Auto V where the protagonists are involved in casual sex with some girls. It is essentially considered as a follow-up to the Hot Coffee Mod from Grand Theft Auto: San Andreas.

Booty Calls occur in The Ballad of Gay Tony after the player impress a girl at Maisonette 9 by dancing with her, if the dancing mini-game doesn't take the player to the Bus Stop mini-game, Luis and the girl will have sex in one of the stalls of the women's bathroom. Afterwards, she will give him her number and tell him to call her.

The player can call her, or she will sometimes call them instead. Sometimes, they also send text messages with pictures of them in lingerie when requesting a booty call. After the call has been made, the girl's house will appear as a booty on the mini-map. The player has to go to this location and listen to the rest. Luis Lopez will gain full health and will auto-save a game. Right afterwards, she'll send a text message with a sexy picture of her enclosed as a way of thanks.

The booty calls have certain time/usage limit, since after a while, the girl will text Luis to stop seeing her and her contact number will disappear from his phone list. It is possible to catch up with that girl if she appears randomly dancing in the club.

There are ten "booty calls" that Luis Lopez can have in The Ballad of Gay Tony: 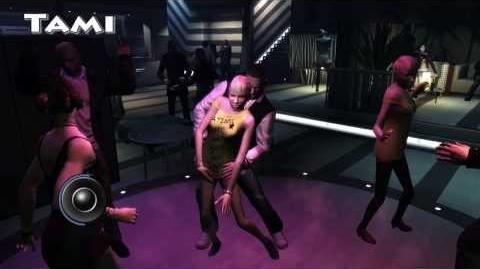 Unlike TBoGT, the contact with the booty call girls is permanent and they won't ditch the player.

The player is required to complete at least one booty call in order to achieve 100% Completion in GTA V.

Español
Community content is available under CC-BY-SA unless otherwise noted.