Bona XL is an electronics company in Grand Theft Auto V and Grand Theft Auto Online that manufactures medical and chemical processing equipment. It is a subsidiary of General Spasmodic, as noted on the badging on some of their products.

Bona XL is a company making oscilloscopes and centrifuges as seen inside the Los Santos County Coroner Office during the Dead Man Walking mission. The company also manufactures chemical processing equipment as seen in Methamphetamine Labs owned by Motorcycle Club Presidents. At the cooling tunnel inside the Humane Labs & Research there are tall industrial machines manufactured by Bona XL. The interior of the Terrorbyte is also fitted with oscilloscopes from the same company.

The company's name is an obvious play on "boner", a slang term for an erection, with the "XL" in the name likely referencing an "extra large" erection, exemplifying Rockstar's crude humor. The company logo bears a resemblance to a glans penis.

Bona XL may possibly be based on General Electric, based on Bona XL's parent company name, General Spasmodic, which appears to be a play on the General Electric name, and also due to the fact that GE also manufactures medical and industrial equipment. 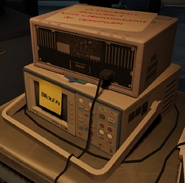 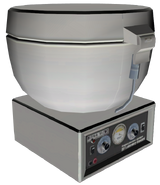 Retrieved from "https://gta.fandom.com/wiki/Bona_XL?oldid=1187560"
Community content is available under CC-BY-SA unless otherwise noted.