View source
watch 02:17
New Pokemon Games - The Loop
Do you like this video?
Play Sound
For the multiplayer mission in Grand Theft Auto IV, see Bomb Da Base II.

In-game time
“Okay, let's do this thing! I can set this baby to detonate, but I still can't use a piece with these hands. Here, this rifle should help you pop some heads!”
— 8-Ball

Bomb Da Base: Act II is a mission in Grand Theft Auto III given to protagonist Claude by explosives expert 8-Ball from his shop in Harwood, Portland, Liberty City.

8-Ball, knowing about the meeting after a phone call from Salvatore Leone, tells Claude that he needs $100,000 for the explosives and tells Claude to return when he has the money. After obtaining the necessary money, Claude returns to 8-Ball's and the two head to Portland Harbor, with 8-Ball giving Claude a sniper rifle, since his hands are still in a condition bad enough to handle a weapon. After arriving at Portland Harbor, Claude gets a good vantage point (likely the staircase on the warehouse) and begins to kill the Colombian Cartel gang members guarding the Les Cargo container ship, with 8-Ball planting the explosives. He detonates the explosives, getting off the ship's bridge just before it sinks.

The reward for completing this mission is $150,000 and the mission Last Requests is unlocked. 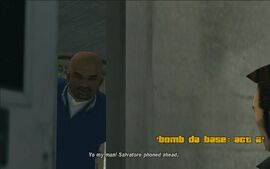 After Claude arrives at 8-Ball's autoyard in Harwood and knocks on the door, 8-Ball answers. 8-Ball says that Salvatore told him that Claude would need help. 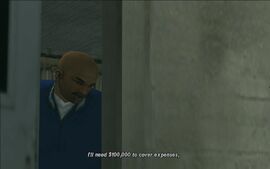 He says that a job like blowing up the SPANK boat will need a lot of money, and that he will need $100,000 to cover expenses. 8-Ball then tells Claude to come back once Claude has the money. 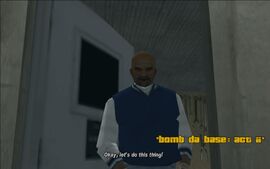 After Claude has collected the money, he once again knocks at 8-Ball's door, who answers and shows enthusiasm in dealing with the SPANK boat. 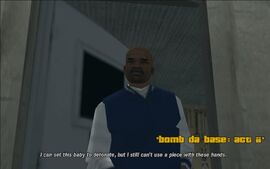 8-Ball tells Claude that his hands are still badly damaged, just like during their previous encounter, so 8-Ball is not able to protect himself, though he can set up the bomb. 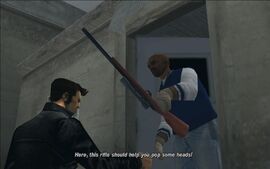 8-Ball gives Claude a sniper rifle that he will have to use to protect 8-Ball while he sets the bomb up in the ship. 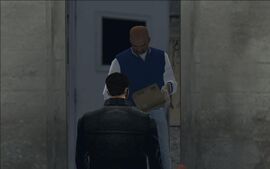 8-Ball takes a box with the explosives and walks outside. 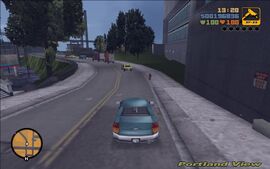 Claude and 8-Ball making their way to Portland Harbor. 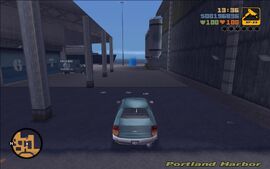 Claude and 8-Ball arriving at the boat's location. 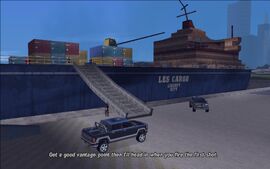 8-Ball tells Claude to get a good vantage point and fire the first shot as a signal for 8-Ball to start moving. 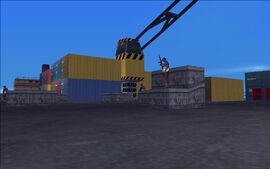 Colombian Cartel gangsters aboard the boat. 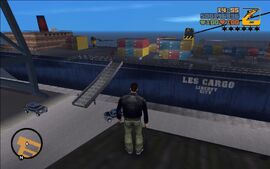 Claude scouting over the location from a vantage point. 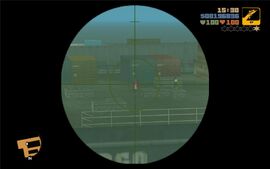 Claude taking out Cartel gangsters with the sniper rifle. 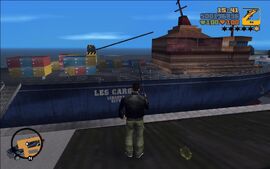 Claude scouting over 8-Ball making his way through the clear boat. 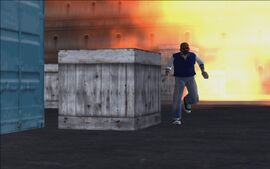 8-Ball escapes from the exploding boat. 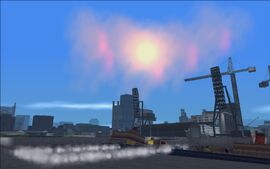 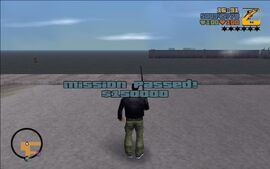 8-Ball telling Claude he needs $100,000 to purchase the explosives needed to destroy the freighter in Portland Harbor.

At the Portland Harbor.

8-Ball running to plant the bomb.

8-Ball running to safety after detonating the explosives.