There are two Bolt Burgers restaurants in GTA III; one in Bedford Point, Staunton Island, and the other is in the westernmost corner of Trenton, Portland. Both are inaccessible, but the former serves as a common destination during the taxi driving side-mission if the player is in Staunton. The Staunton Island restaurant is an iconic sight in Bedford Point as it is marked with a giant 3D burger sign on the corner building. The Trenton restaurant is located just across from the Callahan Bridge. Given the name, Bolt Burgers is likely a parody of the Sonic burger chain, as both names are references to speed and bolts are associated with sonic speed.

In 1998, both Bolt Burgers restaurants are King Knuts instead. By 2001, they have all become Bolt Burgers.

Bolt Burgers also appears at the InterGlobal Films studios in Grand Theft Auto: Vice City, although it is merely part of a film set, which uses the same section of buildings from Bedford Point in GTA III.

On Chatterbox FM, Jane mentions her son shooting a banana cannon across the street at a fast food restaurant. This refers to the fact that the old school hall is across from Bolt Burgers in Trenton.

The giant burger model is the same design as the one featured in the Fat Burger Kid logo. 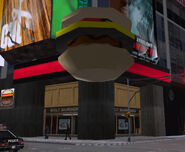 The Bedford Point Bolt Burgers set in the InterGlobal Films studios, GTA Vice City.
Add a photo to this gallery 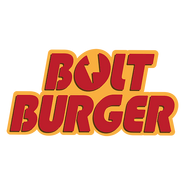 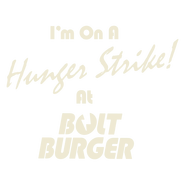 Retrieved from "https://gta.fandom.com/wiki/Bolt_Burgers?oldid=1282936"
Community content is available under CC-BY-SA unless otherwise noted.