It is governed by the San Andreas State Prison Authority. The prison is located on the Los Santos County side of Route 68, just down the road from Harmony. The prison's shape is that of an octagon.

The perimeter of the prison is patrolled by the Los Santos County Sheriff and the Los Santos Police Department. There are armed San Andreas State Prison Authority officers standing near the entrances, making sure that no one attempts to break in or out.

The penitentiary seems to be inspired by the real-life Victorville Federal Prison in Victorville, California[1].

A speaker system is heard commonly around the prison, often insulting the prisoners. There are 41 quotes.[2]

In the Heists Update, during The Prison Break, the crew must storm into the prison to release a Russian prisoner named Maxim Rashkovsky. Some missions and races also take place in the prison in GTA Online.

In 2013, a prisoner has his jaw broken by "Stretch" after snitching on a fellow inmate, which lands Stretch in isolation for five days, which he completes. Stretch also gets tattoos, one of them starts with leakin' real nasty according to Stretch on his Lifeinvader page. It is during his time in Bolingbroke that Stretch forms an alliance with the Ballas and plans to sell out Franklin Clinton and Lamar Davis.

A random encounter can occur around the prison where an escaped prisoner pulls the protagonist over and then points a gun at them, and forces them to get out of their vehicle.

Demarcus Bradley, another inmate, states on his Lifeinvader page that a number of Davis High School students in the 2005 graduating class are in the prison and that he had received a friend request from the guard on his wing. He later goes blind, although it may only be temporary, after drinking prison made wine, watches his cellmate using a toothbrush he had used for other purposes and visited the prisons 'total psycho' dentist. Prison food, judging by Demarcus' comments, is of poor quality in Bolingbroke.

During the "Prison Guard" variant of the Heist Prep: Vault Keycards mission for The Diamond Casino Heist, the player must enter the prison and kill a security guard to steal the Diamond Casino vault keycards. The player hijacks a prison bus and disguises themselves as a prison guard to gain entry without raising suspicion.

During The Prison Contract, the player has to break into the prison and kill multiple sets of targets identified by Lil' Dee for double-crossing their respective gangs before rescuing Lil' Dee and taking him back to Sessanta.

Main Gate to the prison

Entrance to the prison.

Prison guard overlooking the prisoners in the yard

Aerial view of the interior

Inmates working out at the prison

Other inmates working out in the yard 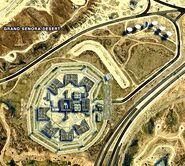 An aerial view of Bolingbroke Penitentary

One of the 10 watch towers.