Located along the northernmost end of Leavenworth Avenue in Northern Gardens, Bohan, Liberty City, the hospital is designated as a respawn point when the player dies in Bohan.

The Bohan Medical & Dental Center is built within a complex also holding a large 24/7 supermarket store, as well as the Northern Gardens Police Station, LCPD's main station within Bohan, and several smaller stores, including No Problemo Bail Bonds and Chris's Donuts, although the medical center seems to take the majority of the complex, given the large sign on the wall. This medical center has not accessible, although a Health pack can be found outside.

Two Ambulances spawn outside the station on the road.

The complex itself appears to be based on the Dreiser Loop complex in Co-Op City, Bronx, New York City. The buildings file name, coop, supports this. 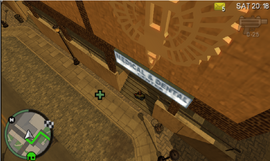 Retrieved from "https://gta.fandom.com/wiki/Bohan_Medical_%26_Dental_Center?oldid=1138934"
Community content is available under CC-BY-SA unless otherwise noted.