This area is not announced on the police dispatcher.
“Great for shootings.”

It is the smallest borough of Liberty City, only containing seven of the city's sixty-five individual neighborhoods with only four accessible businesses. Its real-life prototype is The Bronx, New York City.

Bohan is located in the north-east of Liberty City, and is available from the beginning of Grand Theft Auto IV. However, the Bohan safehouse doesn't become available until after the mission 'Roman's Sorrow'. The borough is first featured either during Shadow or Final Destination.

According to the in-game Public Broadcasting documentary, Bohan is a Dutch word meaning "Dutch word" (although this is false, as the real Dutch word for "Dutch word" is "Nederlandse woord"). In real life, 'Bohan' is an Irish surname, which is roughly a diminutive of the word 'buadhach' meaning 'victorious'.

Most Bohan avenues are named after prisons, with Alcatraz Avenue, Rykers Avenue, Sing Sing Avenue, San Quentin Avenue, and Guantanamo Ave being five notable examples, while others are named after breakdancing moves, such as Worm Street, Spin Street, Applejack Street and Valdez Avenue. South Bohan is also billed in the game as the birthplace of hip-hop, as the Bronx is in real life.

Bohan is economically poor and is the most deprived of the four boroughs in Liberty City, mainly consisting of run-down housing projects, pockets of small-time businesses and shops that have presumably failed shortly after their establishment. Abandoned buildings and decrepit warehouses are a common sight in Bohan, with notable examples in South Bohan and Fortside. Whilst there is often evidence of gentrification in other deprived districts across Liberty City, there is very little evidence of it in these neighborhoods with the exception of Northern Gardens. More often than not, Bohan has higher crime rate statistics than the other boroughs in Liberty City. This is especially alarming when considering that it is also the smallest borough - meaning that the crime would affect most of the local residents in some way or form. Bohan is also home to two different street gangs - the Spanish Lords and the Albanian Mob, as well as one of the five major mafia families in the Commission - the Lupisella Family (though the Lupisella are not physically seen on the streets they do appear in Drug Wars.

South Bohan and Fortside are large residential areas within southern Bohan , and are very impoverished and full of crime. They primarily consist of apartment complexes, some small-time stores/businesses and abandoned/boarded-up buildings. South Bohan also contains one of the largest housing projects in Liberty City, and the largest in the borough of Bohan. There is a strong gang presence in these neighborhoods, with a high level of gang violence in these two districts, with South Bohan and Fortside being Spanish Lords' primary turf.

Chase Point and Industrial generally consist of abandoned warehouses and archaic docking facilities, serving as Bohan's declining industrial districts. Prostitution is very common in these districts, far more so than anywhere else in Liberty City. Prostitutes can be found gathering on many street corners during the nighttime. Also at night, muggers and street thugs will roam the streets. Luis Lopez warns Arnaud, after he is mugged, that things can often get rough, and he shouldn't wander around the area alone.

The police are rarely concerned for any criminal activity in Bohan, more prominently than anywhere else, noted when Niko Bellic is able to enter a warehouse and kill a gang of drug dealers, without receiving any police attention for doing dirty work for Manny Escuela, who aspired to "clean up the streets" and was filming a documentary about the crime and corruption of the borough. Manny's camera man comments after Niko kills the gang: "More senseless death, and the police aren't even here yet...".

Northern Gardens is a working-class area with a much lower level of deprivation, primarily consisting of housing projects, a busy road to the north, and a beach at the very north of it's boundary, but serves as home to many homeless people that thrive on it's resources. Northern Gardens provides Bohan's law enforcement and medical services, and the main function of the neighborhood is the Northern Gardens Projects, one of the largest housing projects in all of Liberty City. While Northern Gardens is still considered to be "the hood", the projects' main complex shows signs of gentrification with the presence of small convenience shops and comparatively modern housing facilities. The police station is directly connected to Northern Gardens Projects by means of a short staircase, to allow for an improved police presence and more effective response to crime.

Boulevard is Bohan's largest and busiest district in terms of traffic. Boulevard primarily consists of a large busy boulevard running through, along with several overpasses. Boulevard also contains considerable parkland and a beach at it's northern boundary. Boulevard is mostly non-residential with the exception of a few low-rise apartments situated on the boulevard edge. The areas to the south of the district are more urban in character and is focused around the Grand Boulevard thoroughfare. Boulevard has a much lower crime rate compared to the rest of Bohan primarily because it contains so few housing areas.

Little Bay is in the far east of Bohan and is the borough's smallest locale. It contains low-rise apartment housing but is very run-down and deprived. Little Bay is also the territory of the Albanian Mob, who cause much of the crime in the area.

The population of Bohan are mainly of Latin American origin; this population trend is particularly concentrated around Puerto Rican South Bohan and Dominican Fortside. Other ethnic enclaves include the predominant African-American demographic of Northern Gardens and an Albanian presence in Little Bay.

Two high schools from Bohan are seen on Hornyhighschoolreunions.com 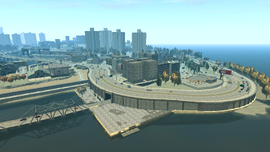 Bohan as seen from the south east. 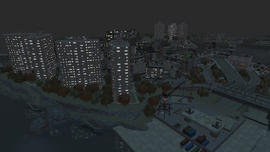 Wikipedia has an article on:
The Bronx