"Yo! That shit sucks! Damn"
―Bogman to OG Loc

Bogman is a character in the Grand Theft Auto series who appears as a minor antagonist in Grand Theft Auto: San Andreas. His name is never revealed in the game, but can be seen in the game's files. His voice actor is not credited. 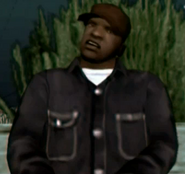 Bogman's look-a-like from The Introduction.
Add a photo to this gallery

Retrieved from "https://gta.fandom.com/wiki/Bogman?oldid=958773"
Community content is available under CC-BY-SA unless otherwise noted.