Peds that uses it

Body Armor is a pickup and gear featured in the Grand Theft Auto series that serves primarily to protect the player's health from specific forms of damage, most notably gunfire. In most cases, body armor in the games is illustrated as a protective blue vest.

The body armor's primary function is to serve as padding for the player health, in effect extending the player's resilience to damage from gunfire, explosions and fire. The Body armor is a standard-issue item among law enforcement agencies, but also a rare sight among criminals.

In early top-down GTA games, armor in both Grand Theft Auto (as well as Grand Theft Auto: London mission packs) and Grand Theft Auto 2 serves its intended purpose, adding 10 more hit points to the player's existing health, but provides no protection to the player when they fall from great heights, are run over by vehicles, or are beaten up by the police and arrested. Armor is most commonly found spawned in specific locations or crates, and, in the case of GTA 2, can also be acquired by crushing specific cars.

In addition to spawning in specific locales, body armor can also be purchased at stores that sell weapons, such as Ammu-Nation, as well as entering the Police/SWAT Enforcer trucks. Like the player's health, armor hit points between Grand Theft Auto: Vice City and GTA Vice City Stories (and GTA Advance) can typically be increased easily via side-missions (such as "Vigilante"), as well as 100% completion of the game.

The appearance of armor pickups has also changed significantly after GTA III. When included in GTA III, the pickup assumed the appearance of a shield icon; in subsequent games, however, the pickup is redesigned as a spinning vest, possibly to avoid confusion with the police bribe pickup.

Armor in Grand Theft Auto IV and Episodes from Liberty City has been refashioned slightly out of realism. It no longer offers protection to falls, collisions with vehicles on foot, or melee attacks (including hand-to-hand combat and melee weapons), increasing the player's chances of death from these hazards. However, it may absorb damage when staying inside a broken helicopter on low altitudes (a higher altitude will not be enough to survive).

As expected, armor can be found lying about in specific points of the city (distinguishable by its red glow) as well as underground weapon dealers in GTA IV. Enforcer armored vans still provide the player some armor, but only gives the player roughly one third of the maximum amount.

When equipped, the HUD will represent it as a blue half-circle bar located next to the radar, along with the green health bar. Similarly, when aiming at armored targets, the weapon's reticle will have a smaller, light blue circle next to the health bar, usually seen on NOOSE/FIB agents.

As a side note, in the multiplayer aspect of all three games in the GTA IV trilogy, body armour is weaker overall, possibly to compensate for the large abundace of it laying around the map in Free Mode. In singleplayer, a Pistol shot typically takes a tiny sliver of armour away from the player, whereas in multiplayer, the same bullet could take nearly a third of the player's armour away. This affects all weapons, including shots fired from other players. As such, armour in multiplayer (as is the case for GTA Online) is far less useful, even with the large amount of it that can be found.

Armor in Grand Theft Auto: Chinatown Wars appears to revert to pre-GTA IV settings. They can be found on AmmuNation.net or winning it with a scratch card. Unlike GTA IV, entering a NOOSE Enforcer gives the player full armor.

Armor suits have been reported to be massively weaker in Grand Theft Auto Online, even at 100%. Probably to compensate for this, players are able to have up to a maximum of ten reserve armor vests (at level 135) in their inventories.

The strength stat, when fully increased does seem to negate this. As it seems the strength stat gives a boost to both armor and health slightly. The armor difference is still very low (around 10-15% depending on the weapon used) but it seems that a super heavy vest (%100), with a character at max strength, can take 2-3 more hits from a carbine rifle or handguns, than a character with a super heavy vest (%100) without a very noticeable strength stat. This is caused by the fact that the strength stat DECREASES overall damage, and not just adds more health. This can be beneficial as it allows much more resilience with armor at range, and thus making armor purchases, and strength enhancing activities a better investment. 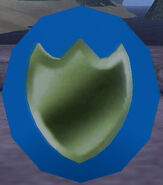 Pickup in Grand Theft Auto IV, The Lost and Damned and The Ballad of Gay Tony.