View source
watch 02:56
Raise a Floppa - The Loop
Do you like this video?
Play Sound
For the first generation Bobcat appearing in Grand Theft Auto IV, see Bobcat.

“A hardy, all-round pickup, the Bobcat XL looks just as at home shuttling weapons through your subterranean facility as it does grinding roadkill into the highways of rural America.”
— Career Builder description.
“Have fun trying to parallel-park the Bobcat XL in a busy city center. This extra long, heavy-duty pick-up truck has become equally popular with both farmers and people who shop at farmers' markets.”
— Southern San Andreas Super Autos description.

The Bobcat XL resembles a 1981–1991 Chevrolet C30 3+3; however, it features an extended cab instead of a crew cab. Its tail lights resemble the ones from the KK Jeep Liberty.

The vehicle is essentially based on the original Bobcat from Grand Theft Auto IV, but comes in a long-wheelbase XL variant. The front cab is identical to that of the regular Bobcat, but the badges on the hood were removed and the front bumper adds a license plate on the center. The rear section, however, uses a wider and longer truck bed, with no side steps and bulky rear fenders that hint at a dually (dual rear wheel) configuration (though it uses single wheels). The rear end features a similar tailgate with the vehicle's name embossed on it, while the tail lights are similar to the ones from the Moonbeam in texture and layout. There is a flat bumper with the license plate on the center, together with a tow hitch similar to the Sadler and the Bison, allowing to tow small trailers.

The interior of the vehicle is based upon the original Bobcat, sharing the characteristic rectangular dial cluster on the driver side, but the interior finish is dark gray rather than the Bobcat's brown one. In the enhanced version, the vehicle uses a dedicated analog dial set, consisting of two main dials on the outer sides (speedometer on the left and tachometer on the right) and two smaller gauges above the steering column (fuel gauge on the left and volt gauge on the right).

All Bobcats XL come equipped with bull-bars, and some have camper shells over the bed and a small visor above the windshield. The vehicle can spawn in a variety of single-tone colors or two-tone colors, where the primary one is applied on the lower side and the secondary one on the upper side and the upper surfaces of the truck bed walls. It uses a set of industrial wheels similar to the "Fairlie" muscle rims seen in Los Santos Customs, wrapped in medium-profile tires.

Being an older heavy-duty pick up truck, the Bobcat XL, while slow, is acceptable given its purpose and size. The vehicle itself is of large mass and therefore negates performance in many areas, including top speed, acceleration rate, and handling. The vehicle has above average deformation thanks to the front bullbar, wide wheel arches (especially in the rear, which benefit in inability to camber the wheels upon crashing), and wide body frame. The vehicle takes large head on crashes before it starts to show signs of engine damage, and the vehicle is also largely bullet-resistant (with the exception of the occupants, who are still vulnerable due to the large windshields).

Like its base model, the Bobcat XL is powered by what is stated to be a 8.9L liter (550 cui) V10, according to badges, but the engine takes the form of a single overhead cam V8. The high displacement engine is connected to, evidently by sound, a 5 speed transmission system, further connected via driveshafts to a front engine, rear wheel drive drivetrain (contrary to its "Super 4x4" badges, which indicates it is an AWD vehicle). It uses a loud diesel engine sound shared with vehicles like the Bodhi, the BeeJay XL and the Granger. 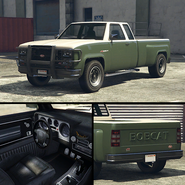 The Bobcat XL on the updated Rockstar Games Social Club.