"Have fun trying to parallel-park the Bobcat XL in a busy city center. This extra long, heavy-duty pick-up truck has become equally popular with both farmers and people who shop at farmers' markets."
―Southernsanandreassuperautos.com description.

The Bobcat is a continually recurring range of two-door pick-up trucks first introduced in Grand Theft Auto III and featured in nearly every game since then, with the only exception being GTA Advance. It is manufactured by Vapid in the HD Universe.

It is widely known for its durability and off-road capabilities.

Certain Bobcats in GTA San Andreas may feature Sprunk cans or a spare wheel in the back, and the Bobcat can be also upgraded at TransFender in GTA San Andreas with changeable wheels, exhausts, etc. Along with the GTA Vice City rendition of the Moonbeam, the game's Bobcat is one of the earliest vehicles in the series to features its name printed on its body (on the tailgate). The Bobcat is used as a gang car by the Trailer Park Mafia in GTA Vice City Stories.

In Grand Theft Auto IV, the Bobcat is now a full-size step side pickup truck, rather than a compact. It mostly resembles a slightly altered 1988-1998 Chevrolet C/K with the headlamps similar to the older 1981-1987 model. Unlike its real life counterpart, the truck has a very powerful 550 Cubic Inch (9.0L) V10 engine. Despite having "SUPER 4X4" written on the side, the Bobcat is purely rear wheel drive, or they may have the 4WD disabled. Bobcats can be seen with optional grille guards, or a roll bar with or without four lights on top, and on rare occurrences, with both. Bobcats may also, very rarely, come with an additional bed cover.

The GTA Chinatown Wars Bobcat is similar to the GTA IV one in terms of appearance, with several minor tweaks and a permanent roll bar.

The Bobcat makes a return in GTA V, looking similar to the GTA IV rendition, but with some changes. It now only comes in a long-wheelbase Bobcat XL, and the stepside version is no longer featured. The bed is longer than the GTA IV version, but it retains the front end of the GTA IV Bobcat. All Bobcats now come equipped with bullbars, and some have camper shells over the bed. As with the Bison, the Bobcat XL is classified as a van, despite being a pick-up truck. While the design hints at a dual (double rear wheel) configuration, the Bobcat XL has single wheels and tires on the rear axle.

The tail light texture is shared with the Moonbeam and resembles the tail light design from the KK Jeep Liberty. 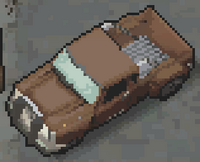 The Bobcat is fairly slow at 135 mph, but has high torque and strong, stiff suspension. However, the low power and heavy weight means it takes a long time and a straight and clear road for the Bobcat to achieve maximum speed. It is rear-wheel drive and handles well on rough terrain, so it can be used for mild off-roading, but is inferior to the Patriot in this respect. Some versions are four wheel drive. In GTA San Andreas, like the Sadler, the four cylinder engine is mounted transversely, which is impossible to drive the rear wheels without driving the front as well.

In terms of performance, the Bobcat is capable of rapid acceleration and a slow top speed of 136mph. The vehicle does not turn sharply, but can powerslide around corners with enough use of the emergency brake. Off road, the Bobcat suffers from lack of 4WD, low ground clearance, and extremely poor wheel articulation. Also, the engine is somewhat overpowering, resulting in undesired wheel-spin in soft sand. The truck should not be considered a heavy duty vehicle for off road use. The Bobcat also has a 5-speed manual transmission, as indicated by a third pedal to the left, if looked at closely enough. Damage is average, and because of the roll bar, it won't have much roof damage in rollovers.

The Bobcat can be modified at TransFenders.

The Transfender in Las Venturas charges 20% more for every modification except colors.

A black Bobcat featured during "Stowaway" in GTA San Andreas.

Irish Killers variant of the Bobcat in GTA Chinatown Wars.

The regular Bobcat is available with various unique qualities in some of the games it appears in:

In addition, there exists a gang variant of the Bobcat in GTA Chinatown Wars driven by the Irish Killers gang. The "gang" Bobcat is distinguished by its green body and red roof.

Retrieved from "https://gta.fandom.com/wiki/Bobcat?oldid=853390"
Community content is available under CC-BY-SA unless otherwise noted.