The Bobcat is a continually recurring range of two-door pick-up trucks first introduced in Grand Theft Auto III and featured in nearly every game since then, with the only exception being Grand Theft Auto Advance. It is manufactured by Vapid in the HD Universe.

Throughout the 3D Universe, the Bobcat remained generally the same, being a compact two-door pickup truck with a seemingly small body and a medium-sized bed with the corresponding tailgate.

In Grand Theft Auto III and Grand Theft Auto: Liberty City Stories, the Bobcat resembles a 1993–1997 Ford Ranger, with influences from the 1998–2000 Toyota Tacoma. Its design is generally rounded and has large bumpers, a small grille, a bulged hood, wide arches and a tailgate with a silver detail. The GTA III rendition has a 3D modeling glitch where the passenger's side headlight is rounded, but the other one is longer and rectangular. This was rectified in GTA Liberty City Stories, receiving rounded lights. The vehicle spawns in a variety of primary colors on the body, with secondary colors on the bumpers, mirrors, door handles and the detail of the tailgate.

In Grand Theft Auto: Vice City, Grand Theft Auto: San Andreas and Grand Theft Auto: Vice City Stories, the Bobcat strongly resembles a 1983-1992 Ford Ranger, with some minor influences from the 1981-1993 Dodge Ram D150 and a rear end appearing to be modeled on early models of the Toyota Hilux, with the appearance of its taillights and the word "BOBCAT" standing in for "TOYOTA". The GTA San Andreas rendition features a grille that seems inspired by the Jeep Comanche. Its design leans towards a more traditional shape, with square-shaped lights, smaller bumper and angular cabin, along with marker lights on the front fenders. Certain Bobcats in GTA San Andreas may feature Sprunk cans or a spare wheel in the back, and can sport either dirty or clean truck beds. The Bobcat can also be upgraded at TransFender, with changeable wheels, exhausts, etc. Along with the GTA Vice City rendition of the Moonbeam, the game's Bobcat is one of the earliest vehicles in the series to features its name printed on its body (on the tailgate). The Bobcat is used as a gang car by the Trailer Park Mafia in GTA Vice City Stories. Bobcats are available in two-tone body colors for all three of these renditions, with the secondary colors in the form of wide stripes on the sides and rear.

In Grand Theft Auto IV, the Bobcat is depicted as a full-size step-side pickup truck, whose overall design is a blend of two generations of the Chevrolet C10. The front half and greenhouse area bear a resemblance to the 1988-2000 Chevrolet C10, while the bed, rearview mirrors, rear windshield, and front fascia are drawn from the older 1981-1991 model. The rear lights resemble that of the 1967-1972 Chevrolet C10, but have been inset into the rear fenders instead of being suspended from the tailgate.

The front of the vehicle is rather square-shaped, featuring a silver bumper with what seems to be a dedicated central section for a license plate (though no actual plate is present), along with small vents and rectangular turn signals above. On the upper area, the vehicle features dual silver grilles with seven horizontal elements per half and silver housings with square headlights beside both halves of the grille, which are split by a painted horizontal divider and bearing the Vapid logo on the center, alomg with a "v10" badge on the lower half of the grille, next to the driver-side headlight. The hood is slightly elevated on the center and bears silver "VAPID" lettering above the upper grille and a "550cui" badge on the driver side.

On the sides, the vehicle features square-shaped front wheel arches with slightly flared profile, along with badges on the fenders. Directly at the bottom, there are silver side steps for access, whose upper surfaces bear additional badging displaying the manufacturer emblem and the vehicle's name. The cabin is relatively simple in appearance, having black sealed trim around the windows and square-shaped mirrors near the A-pillars, finished in silver.

The rear area consist of a narrow truck bed, which feature wide arches, small steps behind the cabin and dual exhaust pipes below the driver-side load bed step. On the rear end, there is a large tailgate with "BOBCAT" embossed on an inset section and badges on the lower corners, while the wide arches have rectangular sections extending towards the rear end, housing circular red/white lights and rectangular turn signals at the bottom. The rear bumper consist of dual frames finished in silver, having additional frames on the outer sides, a flat step on the center and a plate holder on the passenger side.

The interior has a grey/bluish finish and features a rectangular section on the dashboard with what seems to be two large dials on the sides and two smaller gauges above the steering column, with the radio set on the center of the dashboard and a glovebox compartment on the passenger side. The floormats appear to have the Vapid logo on both sides, just in front of the seats.

Bobcats can be seen with optional grille guards, or a roll bar with or without four lights on top, and on rare occurrences, with both. Bobcats may also, very rarely, come with an additional bed cover. However, it will never be found without boxes in the bed. Bobcats are commonly seen in a variety of single-tone colors, with the exception of a dark grey and light grey example, where the primary color is applied on the entirety of the vehicle amd the secondary color on the rear section. It uses six-spoke rims wrapped in high-profile tires.

The vehicle shares the same horn sound with the Rancher.

In Grand Theft Auto: Chinatown Wars, the Bobcat is similar to the GTA IV one in terms of appearance, with several minor tweaks and a permanent roll bar.

Pre-GTA IV Bobcats have a V6 engine, with the only exception being the 4-cylinder in San Andreas and Vice City Stories. The Bobcat is fairly slow, but has high torque and strong, stiff suspension. However, the low power and heavy weight means it takes a long time and a straight and clear road for the Bobcat to achieve maximum speed. It is rear-wheel drive and handles well on rough terrain, so it can be used for mild off-roading, but is inferior to the Patriot in this respect. Some versions are four wheel drive. In GTA San Andreas, like the Sadler, the four cylinder engine is mounted transversely, which is impossible to drive the rear wheels without driving the front as well. While similar to earlier renditions, the GTA San Andreas, GTA Liberty City Stories and GTA Vice City Stories renditions sport lower ground clearance.

In GTA San Andreas, the Bobcat, together with the Sadler, is the third most durable vehicle in the game, as seen in the stats.

In terms of performance, the Bobcat is capable of rapid acceleration and a slow top speed. The vehicle does not turn sharply, but can powerslide around corners with enough use of the emergency brake. Off road, the Bobcat suffers from lack of 4WD, low ground clearance, and extremely poor wheel articulation. Also, the engine is somewhat overpowering, resulting in undesired wheel-spin in soft sand. The truck should not be considered a heavy duty vehicle for off road use. The Bobcat also has a 5-speed manual transmission, as indicated by a third pedal to the left, if looked at closely enough. Damage is average, and because of the roll bar, it will not have much roof damage in rollovers.

According to the badges, the truck is stated to have a very powerful 550 cubic inch (9.0L) V10 engine, yet the engine model appears to be a single-overhead cam V8, coupled to a 5-speed gearbox. Despite having "SUPER 4X4" written on the sides, the Bobcat is purely rear wheel drive, or they may have the 4WD disabled. The Bobcat shares the same engine sound as the Rancher, being generally mid-revving and quite loud.

The Bobcat can be modified at TransFenders.

The Transfender in Las Venturas charges 20% more for every modification except colors. 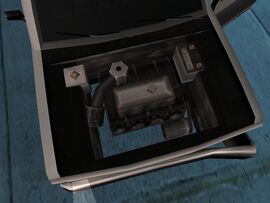 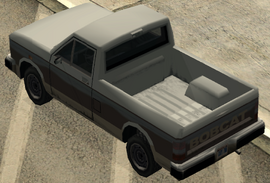 A Bobcat with a dirty bed in GTA San Andreas. 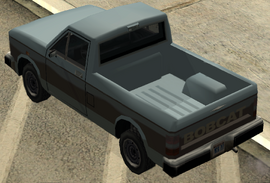 A Bobcat with a clean bed in GTA San Andreas. 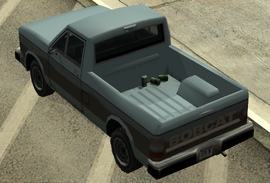 A Bobcat with Sprunk cans in the bed in GTA San Andreas. 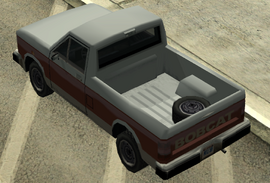 A Bobcat with a spare tire in the bed in GTA San Andreas. 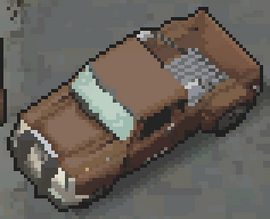 The Bobcat in the Nintendo DS version of Grand Theft Auto: Chinatown Wars. 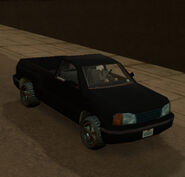 The black Bobcat appears in Love and Bullets in GTA Liberty City Stories. 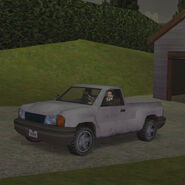 The requested Bobcat in Stevie's Car Thefts in GTA IV.

Irish Killers variant of the Bobcat in GTA Chinatown Wars.

Zhou Ming's white Bobcat with crates in the back.

It is the most common pickup truck in the game, appearing almost everywhere.